The uprise in the prices witnessed a growth of more than 7 per cent in just a few trading sessions. The prices of LME Aluminium settled at US$1,827 a tonne on 18th July 2019, up by 5.48 per cent in just one month.

The factor which is supporting the aluminium prices in the international market is the China’s push on the infrastructure and its monetary stimulus, and over the high demand in China, the global investors are turning their eyes on world’s top alumina exporter-Australia.

Australia is the world’s top alumina exporter and Bauxite producer, with the key markets of China, United States, Germany under its supply chain. The primary aluminium prices are forecasted by many independent analysts and experts to witness robust growth in the years ahead.

The Australian Department of Industry, Innovation and Science (or DIIS) anticipates thealuminium prices to average around US$1,880 a tonne is 2019 prior to reaching an average of US$2,015 a tonne by 2021. 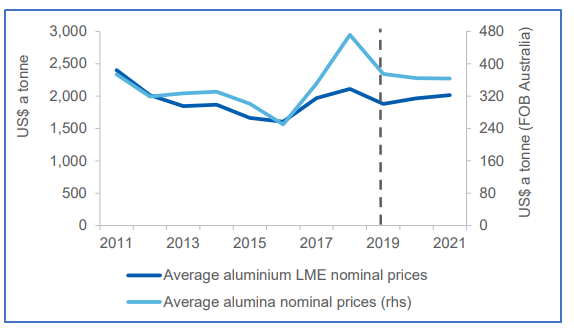 China underpinned lower volumes growth previously amid the escalated U.S.-China trade war and a high tariff on aluminium trades, which in turn, exerted pressure on aluminium prices earlier in the international market.

However, China is now pushing the infrastructure growth while providing monetary and Fiscal stimulus for growth, which in turn, is again pulling up the aluminium demand in the market and supporting the prices.

The total Australian export value of aluminium, alumina and bauxite is forecasted to peak in 2018-2019 to the level of $16 billion before marginally declining to $14 billion in 2020-2021.

One of the largest aluminium consumption sector- Automotive industry in China witnessed a 14 per cent yearly decline in sales till April 2019, which represented the tenth consecutive decline. Moreover, over the softening trade tension, the global industrial production is forecasted by the DIIS to grow at a slow pace, as a result of which, the global aluminium consumption is predicted to grow by 1.2 per cent in 2019 or approx. 67 million tonnes. 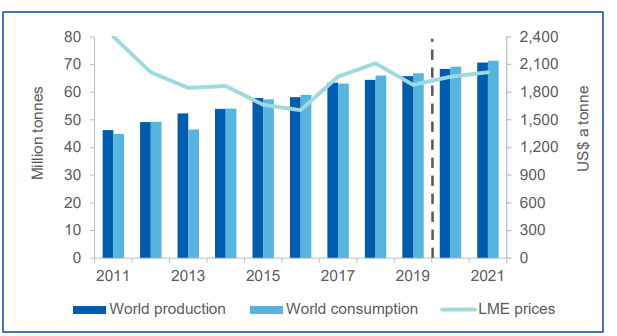 The DIIS further anticipates that the consumption of the primary aluminium would grow at an average annual rate of 3.4 per cent in 2020 and 2021, to reach the level of 71 million tonnes by 2021.

The global supply chain is anticipated to inch up by 2.1 per cent in 2019, to reach the level of approx. 66 million tonnes amid Chinese aluminium capacity, which would originate from the ramp-up of the new smelter.

In a nutshell, the global supply and demand would slightly favour the demand over the coming years; however, the investor should monitor the global automotive sales figure, which is currently facing the issue of EV galloping.

Over the global cues, the investors should keep a close eye on the Chinese stimulus and environmental regulation along with any development in the U.S-China trade tiff to reckon the upcoming demand and supply scenario completely.

The company is currently raising capital to acquire Polar Sapphire- a private Canadian company, and to fund a commercial-scale factory.

The Polar’s modular system holds many advantages over the conventional methods of producing the high purity alumina such as the requirement of low capital expenditure & operating cost; and flexibility to produce multiple grades at once along with rapid expansion.

The company would acquire all the outstanding equity of Polar Sapphire for a cash consideration of C$12 million along with C$13.75 million in the company’s share. The Polar would also capture three board seats in the company.

The share of the company ended the day’s session on Friday at $0.033, down by 2.941 per cent as compared to its previous close on ASX.

BAU is an Australian Securities Exchange-listed bauxite miner, and the company is focused on exploration and development of bauxite deposits in Western Australia. The bauxite project portfolio of the company includes the Darling Range Project, Athena- HD mining, Dionysus and Ceres- HD mining. The company also operates in high-grade silica quartz.

BAU mentions that the Darling Range is proven bauxite and alumina producing region, and the company is committed upon the identification and development of high-quality bauxite resources. The resources of the prospect demonstrate low reactive silica with high alumina to reactive silica ratios.

The speciality of the prospect is the structure of alumina mineral, which is a tri-hydrate, which in turn, makes the extraction of the alumina easy against the mono-hydrate mineral structure, which in a cascade reduces the refinery costs. Another advantage of the prospect is in the position of bauxite minerals; the minerals are near to the surface, which makes the mining easy and cost-effective.

BAU, entered in a Joint venture with HD Mining and Investment Pty Limited in 2010 to explore bauxite, and as per the company, the current Mineral Resources of the JV prospect stands at 94.7 million tonnes, which is further divided into 93.2 million tonnes Inferred Category (JORC 2012) and 1.5 million tonnes Indicated Category.

The share of the company ended the day’s session on Friday at $0.040, unchanged as compared to its previous close on ASX.

ABX is an Australian Securities Exchange-listedhigh purity bauxite miner, explorer and producer, and the principal operating areas of the company are Queensland, NSW (New South Wales), and Tasmania, in which the company jointly holds about 30 tenements.

Binjour, the prospect in Queensland is a source of trihydrate bauxite minerals (gibbsite), which makes the bauxite from the mineral refiners friendly. The company worked with landlords to logistics in order to develop a viable strategy for the Binjour Bauxite Project to produce and deliver metallurgical bauxite of good quality.

ABX entered a Memorandum of Understanding with the authorities of the Port of Bundaberg to identify the opportunity to export in bulk cargo through the port, which is about 200kms by road from the project location. 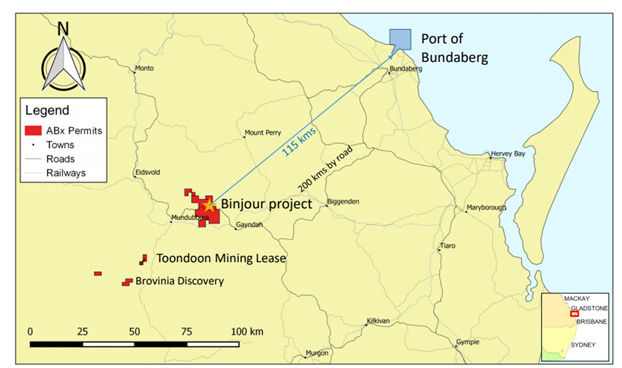 The Memorandum provided the company with an access to a vacant block to investigate the suitability of the block owned by the Port Authority for bulk storage and loading large bulk carrier ships with an annual volumes of approx. 1Mtpa.

The mineral profile of the bauxite prospects of the company is as: 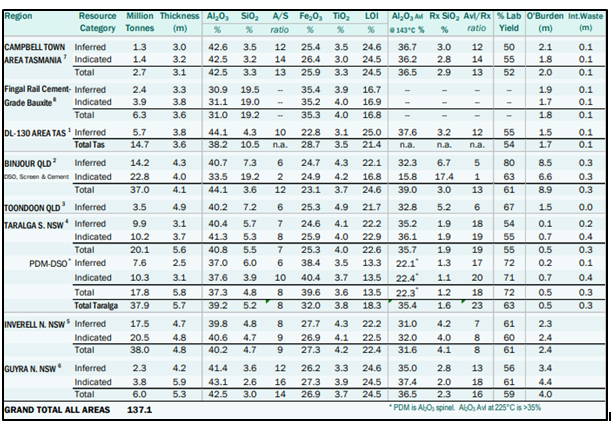 The Shares of the company ended the day’s session on Friday at $0.125, down by 7.407 per cent as compared to its previous close on ASX.