Lithium prices are tumbling in the international market over the lithium glut, which is dragging the ASX-listed lithium players down; however, from industry experts to investors, all are betting high on lithium stocks over the anticipated rush in the white gold demand amid EV trends and boom in the energy storage sector.

The world’s top lithium suppliers, Australia and Chile, are expecting higher export volumes in the international market over the coming years.

The estimation of higher exports could further boost the supply chain, and over this reason, the lithium players are losing charm; however, the lithium industry players are still optimistic over the anticipated growth story.

The recent stance of the global economies to curb the environmental pollution in accordance with the Euro-6 emission standards is favouring the EV projections.

The Electric Vehicles are penetrating the market at a rapid pace and underpinned exponential growth in 2018. The total sales of electric vehicles across the globe exceeded 2 million in 2018; while China alone reported the sales of new electric vehicles of 1.26 million, which in turn, witnessed a yearly growth of 61.5 per cent.

Apart from China, the global economies demonstrated promising signs of EV penetration in the Automobile industry, and expect China, the sales of EV across rest of the world in 2018 stood at 763k, up by 69.6 per cent as compared to the previous year.

The Electric vehicles are penetrating both China and the United States automobile market, and the industry experts forecast around 3.8 - 4.5 million EVs to be on the road by 2020. Norway which boasts of being the world leader in EV market share, with 46% of all cars sold in the country is electric.

The development and increased penetration of electric vehicles are also pulling the demand for lithium-based batteries, and with every new EV entering the market, the growth for lithium-ion batteries are also growing in terms of higher volumes.

As time is passing by more and more counties are joining the roof of carbon resilient economies, which over the long-run could provide a potential benefit to the carbon-free EV industry and in a cascade, could further provide a long-term growth impetus to the lithium prices and players.

The cost of per-unit dry metric tonne of lithium concentrate marked a decline of over 25.50 per cent during the June 2019 quarter against the March 2019 quarter.

The overall production and operations of the company during the June 2019 quarter are as: 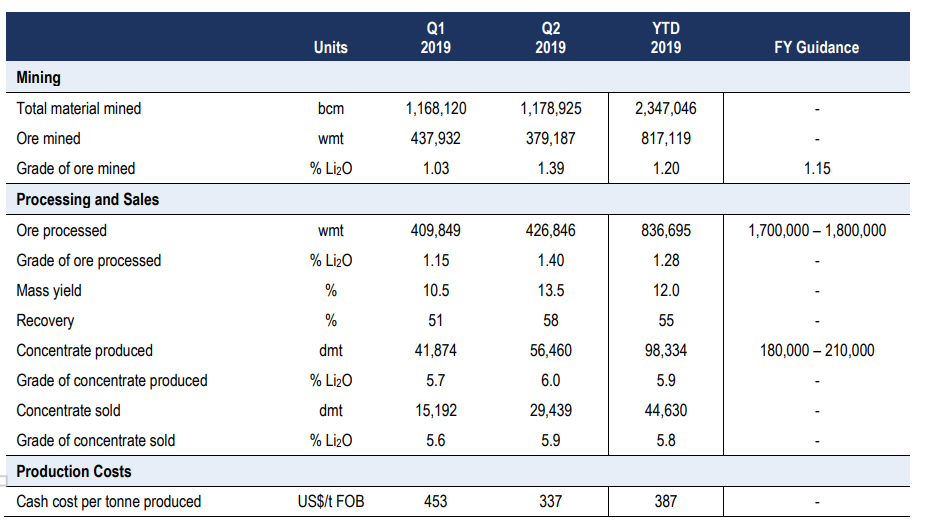 Development During the Quarter:

The Phase 2 test work on the upstream operations reached near completion at the James Bay prospect during the June 2019 quarter, which in turn, validated the process design criteria of the concentrator.

The June 2019 quarter also witnessed the addition of three senior officials in the Argentinian management.

The overall mining volumes and ore grades further inched up in the June 2019 quarter against the March 2019 quarter, which also witnessed a volume and grade growth.

JDR, an Australia-based mineral explorer, presented the update on detailed sampling; acquisition and interpretation of regional gravity and magnetic survey data on the Vranje-South Project.

JDR completed the latest fieldwork over the Siberian Vranje-South prospect to determine the geometry of the sedimentary basin along with the sedimentary sequences. The field mapping, along with the detailed sampling program, attempted to locate the outcropping fine pelitic strata, which are known to be favourable hosts for Lithium and Boron mineralisation.

Post collecting 28 rock samples, JDR dispatched them for geochemical analyses and received the results, which in turn, underpinned elevated lithium and boron values of up to 180 parts per million and 430 parts per million (ppm) respectively.

JDR, which acquired the gravity survey data from Vecom GEO doo- a local contactor, combined the data with the surface sampling data to identify the drilling targets.

As per the company, the Vranje basin hosts an elongated north-south trend, which is parallel to the regional tectonic Paleozoic extensional structure.

JDR acquired the ground magnetic survey to better define the presence of blind Calc- Alkaline volcanic formations at the prospect, that might be related to a spring emanation. The regional magnetic data further shows a magnetic anomaly of possible volcanic sources of boron and lithium.

LPD, the producers of lithium chemicals through proprietary technology, announced on 16th July 2019, that the company commenced 4,700-metre diamond drilling at its Karibib Lithium Project in Namibia.

The company plans to complete the drilling program during September 2019 quarter, which would further allow a mineral resource upgrade during the December 2019 quarter. The drilling program, which would cost the company about A$1 million, intends to upgrade the current mineral resource of the prospect into Measured and Indicated category under the JORC 2012 Code.

LPD currently developed a sampling program of surface stockpiles to gain a better understanding of grade and tonnage at the Rubicon and Helikon deposits.

The mineral profile of the deposits at the prospect is as: 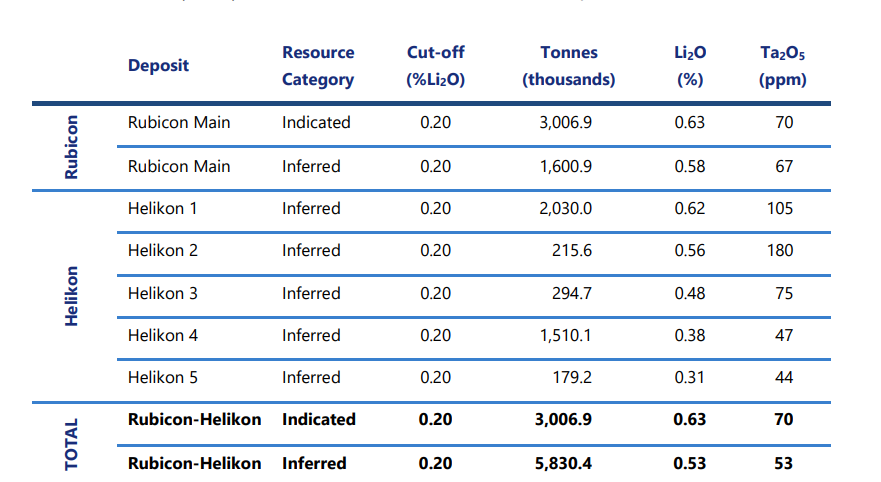 The lithium-based project of the company contains four granted tenements, which includes one mining lease (ML204) and three exploration permit licences (EPL5439, EPL555 and EPL5718), and all the tenements at the prospect cover 1,054km2 of the Karibib Pegmatite Belt, which is a significant belt of LCT-Type pegmatites.

The JORC 2012 Code complied Mineral Resource estimate for the prospect is at 8.8 million tonnes with an average grade of 0.56 per cent lithium oxide, which the company intends to convert into Measured and Indicated category through extensive drilling.

PNN, an ASX-listed lithium brine explorer and project developer, reported on 16th July 2019, the results of a study for the brine in Rincon, Pular and Incahuasi projects.

The simulation by the company further indicated that the contaminates reduced from mixing the sulphate and calcium brine would result in enriched brine of 2.24 per cent lithium or 22,400 parts per million lithium with a low Magnesium: Lithium Ratio of 1.02:1.

The final brine composition of Rincon Incahuasi blend is as:

PNN further combined the brines from both the projects in different projections and produced three different brine mixes, under which the Case 1 blend resulted in the dramatic increase in the lithium recovery amid respective brine chemistry.

While the peer groups are engaged in exploration and development, Altura Mining Limited (ASX: AJM) is securing offtakes for its flagship Pilgangoora prospects with Chinese counterparts. China is currently ensuring exposure to the lithium market, and the country is strategically investing in lithium projects to take advantage of the current market conditions.

As on current standing, the lithium prices are relatively down, and Chinese private and public sectors are eyeing on the lithium resources over the long-run by either directly investing in Australia-based lithium projects or securing supplies from Australian miners.

CLICK HERE FOR YOUR FREE REPORT!
Tags:
Altura Mining Limited (ASX: AJM) Galaxy Resources Ltd (ASX: GXY) Lepidico Limited (ASX: LPD) PepinNini Lithium (ASX: PNN) ASX: JDR lithium EV
All pictures are copyright to their respective owner(s).Kalkinemedia.com does not claim ownership of any of the pictures displayed on this website unless stated otherwise. Some of the images used on this website are taken from the web and are believed to be in public domain. We have used reasonable efforts to accredit the source (public domain/CC0 status) to where it was found and indicated it below the image.