Australian Retailers Contribute Towards Bushfire Relief, But Will The Fire Impact Their Sales?

Call it an ecological catastrophe, an unprecedented fire season or perhaps the gravest economic damage that Australia (and the world) has seen, the Australian bushfires have destroyed thousands of structures, taken a massive toll on animals with billions dead, and claimed dozens of human lives. In merely a few weeks, the calamity is believed to have destroyed flora and fauna, with the consensus believing that once the fire season is over, Australia will be a very changed place.

Bushfire and its Impact

Bushfires refer to any fire in natural vegetation that is not been undertaken for some management purpose.

It should be noted that Fire is an inescapable and hugely important part of the Australian environment- due to the damage caused by bushfires and because fire is a critical factor in the management of virtually all types of land in Australia, even in suburbia.

The effects of high intensity wildfires on the community and the environment are adverse. 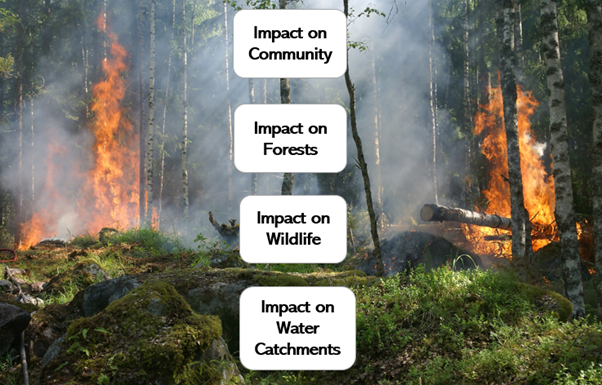 The bushfire crisis is believed to have burned over 8 million hectares of land, destroyed over 1000 homes and killed just a few under 100 people, with temperatures of over 40 degree Celsius and unpredictable winds sweeping through a range of fire zones. South Australia, NSW and Victoria are amongst the most impacted regions, with emergency warnings being issued to citizens to leave fire-impacted areas (pre-emptive relocation).

Moreover, experts opine that the overall economic damage from the bushfires is projected to break the previous record $4.4 billion set over a decade ago. The economic growth over the December and January quarters is likely to take an approximately 0.3 percentage point hit, expert analysis state. Fires are expected to harm Australia’s existing feeble consumer confidence. Some industry experts are expecting another rate cut in February as a consequence. Moreover, industries pertaining to tourism, farming, consumer staples (especially retailers) etc. are likely to suffer.

Acknowledging the raging bushfires wreaking havoc across Australia, the world has been contributing to offer support to the Australian Government, partners and citizens who are battling the chaotic impact of the fire blazes. Few reports have flagged the relief donations to have crossed $140 million.

Be it Chris Hemsworth (Tourism Australia's current Ambassador), Minderoo Foundation or billionaire businessman James Packer, celebrities, philanthropists, generous individuals and businesses from Australia and overseas have come together to aid the country out of the catastrophe. UNICEF has offered its help and support to the immediate and long-term needs of children affected by the calamity.

The bushfire crisis is far from over and the Australian weather conditions seem primed for further blazes. As bushfires continue to burn across eastern and southern Australia, retailers have been one the frontline of corporate bushfire relief, as small and large businesses stumped up millions in cash and services to help the crisis at hand.

Woolworths has become an official supporting partner of Sydney Zoo where animals would be feeding on surplus food rescued from the Company, a WOW report intimated. This has a dual motive- to reduce wastage across Woolworths stores in a bid to tackle the $20 billion food waste problem in Australia. Moreover, WOW lengthened the paid leave entitlements for its team members who are volunteering for rural fire services (covered by an Enterprise Agreement).

On the other side, Coles customers offered over half a million dollars to the Recovery Fund and Red Cross Disaster Relief as donations. The total funds raised so far is estimated to be more than $1.5 million (as reported by Coles on 9 January 2020). Moreover, this donation is done apart from the $3 million (in gift cards) offered by COL to rural fire brigades. The company has been donating pallets of food and essentials to affected communities in NSW, Victoria and South and West Australia.

Australian retailers had a much softer lead-in to Christmas 2019 than they have had in a few months. The bushfire crisis blazed up amid the already weak consumer spending with Australians saving, rather than spend their tax and interest rate cuts.

There is no doubt that the tragic loss of lives, the massive scale of the destruction of homes and properties and the wreckage to Australia's unique landscape will reap adverse consequences to communities and businesses alike. Market experts believe that slower than anticipated growth is expected to hamper the retailers margin expansion across the country.

Analysts project that retailers might witness a material change in their finances, majorly due to a drop-in outdoor activity, issues in supply and warehousing, trading disruption with lower trade and DIY activity. Moreover, the calamity might force retailers to even close down few stores in affected areas. Few retailers might have to throw stock out in some stores due to power outages. Power and road access would also be difficult and tourism trade might be heavily impacted.

With bushfires claiming lives, destroying flora and fauna and bringing in a fear of recession for the first time in over three decades, Australia is in dire need of both practical and emotional support. The coming few weeks would intimate about how the disaster can be best managed as businesses and communities hope and pray for it to subside at the earliest.