Gold prices are narrowing down and are in and under consolidation; however, the prices are hovering around its new base of USD 1,500 per ounce, which is sufficient for the gold miners to take their exchange option into consideration.

Also Read: Is the Emergence of Volatile Patterns in RSG and SAR a Warning Sign for Gold Bulls OR Does Gold Still Stand Strong?

The operating cash flow of the mine stood at $30.6 million, while net mine cash flow stood at $20.0 million post a growth capital of $10.5 million.

The stoping at the mine would continue to ramp up the production, and SAR would consider Karari- Dervish as one mine.

The quantity of processed ore witnessed a decline; however, higher grade supported the production.

SAR aims to extend the mill in order to increase the throughput to 3.2 million tonnes per annum, and the preferred tender is imminent to undertake the mill expansion. The mill expansion would witness the addition of a second ball mill along with upgrades to the gravity gold recovery circuit and elution column.

The operating cash flow of the mine stood at $51.9 million, while the net mine cash flow stood $34.2 million post adjusting with the growth capital of $17.7 million, expended on Thunderbox underground development and Kailis Stage 2 mine development.

The strip ratio remined below 1:1 for the September 2019 quarter and mined grades increased at the Thunderbox C Zone pit. The closing ore stockpile stood at 102,300 ounces, which marked a 50 per cent increase from the previous quarter.

Kailis Stage 2 would continue to supply high-grade oxide feed for the Thunderbox processing plant over the coming year.

The total cash, bullion and investments at the end of the September 2019 quarter stood at $196.1 million, up by almost 27 per cent from the previous quarter.

The NPAT (unaudited) generated during the quarter stood between $42-$45.

The delivery of the gold and hedge stood as below: 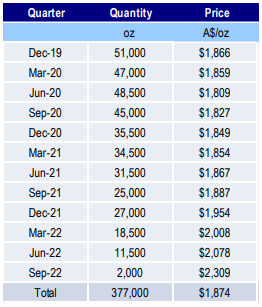 Gruyere and the Gold Fields (50:50) delivered another quarter of milestones. The development at the project was completed within budget while attaining the commercial production at the end of the quarter.

The company mined a total of 2.1 million tonnes of ore (50 per cent basis) with an average grade of 0.88 gram per tonne for 59,662 contained ounces of gold. The LOM average production of the JV is anticipated by the company to be around 300,000 ounces per annum over the 12?year life with an average AISC of $1,025 per ounce.

The ore stockpiles at the end of the quarter stood at 3.2 million tonnes including 0.9 million tonnes @ 1.18 gram per tonne ROM scheduled for December 2019 quarter.

The processing plant at the JV continued operations post pouring the first gold in June 2019, and after the commissioning of the ball mill in August 2019, the project is ramping up, and GOR estimates the that the project would take six to seven months to reach full potential.

The processing the mining activities at the project stood as below:

The net debt of $9.3 million remained below the GOR’s anticipation amid less expenditure and higher revenue from the Gruyere JV. 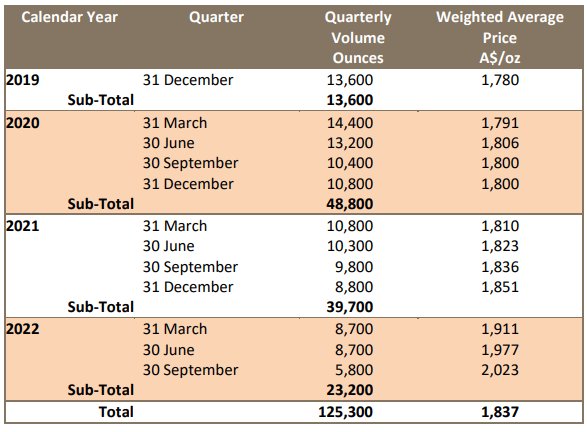