A look at the Real Estate Space - SCP, CLW and GOZ

In the recent past, the real estate segment experienced some growth aided by the marginal improvement in the consumer sentiment. Due to tepid GDP growth in the recent past, the overall segment might continue to witness some challenging times for the upcoming years. Higher occupancy rates suggest improved income flow for the above segment. We will be covering three investment companies which operate in managing assets within Australia. Performance of the real-estate segment is directly co-related with the operating performance of the investment companies which invest in real estate followed by certain banks which have loan exposure across real estate sector.

Let’s have a look on the recent updates and as well as the financials of these three companies.

Shopping Centres Australasia Property Group operates in managing investments in shopping centers across Australia. On 17 January, the company reported an unfranked dividend distribution of $0.075 dividend per share. The company also informed the issue price of stapled units under SCP’s DRP at $2.71 per unit.

FY19 Financial Highlights for the Period ended 30 June 2019: SCP declared its full year 2019 results wherein, the company reported gross property income at $263.8 million as compared to $208.9 million in previous financial year. Net operating income came in at $185.8 million, depicting a growth of 24.0% on y-o-y basis. Property expenses in terms of gross property income came in at 30.9% as compared to 30.5% in previous financial year. Distribution income from CQR came in at $4.4, declined by 21.4% on y-o-y basis. Fair value of investment properties declined by 154.7% from FY18 at ($40.5) million. The net interest income of FY19 includes swap termination cost of $17.7 million. Average debt drawn rose by ~$230.0 million on account of the acquisitions and developments, less divestments to SURF and equity raised during the period. 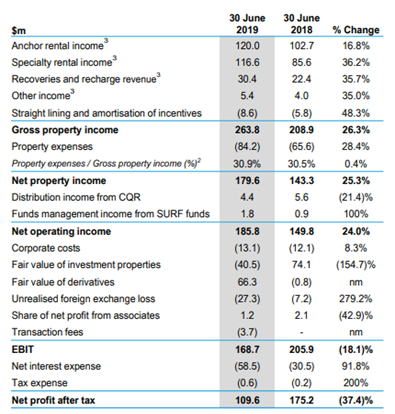 Stock Update: The stock of SCP closed at $2.820 with a market capitalization of $2.64 billion on 21 January 2020. The stock has generated positive return of 3.28% and 16.46% in the last three months and six months, respectively. The stock is available at a price to earnings multiple of 22.46x on its trailing twelve months (TTM) EPS basis. The stock has generated an annualized dividend yield of 5.28%.

Charter Hall Long Wale Reit manages its funds by investing in the real estate sector in Australia. On 20 January 2019, the company reported an unfranked dividend distribution of $ 0.0700 per security held. The payment date is 14th February 2020.

Cash Flow Highlights for FY19: The company reported net cash flows from operating activities at $63.683 million, net cash used in investing stood at $477.504 million while net cash from financing activities came in at $414.719 million during FY19.

Stock Update: The stock of CLW closed at at $5.580 along with a market capitalization of $2.7 billion on 21 January 2020. The stock has generated stellar return of 9.70 % and 28.02% in the last six months and one year, respectively. The stock is available at a price to earnings multiple of 20.99x on its trailing twelve months (TTM) EPS basis.

Stock Update: The stock of GOZ closed at $4.410 along with a market capitalization of $3.43 billion on 21 January 2020. The stock has generated positive return of 3.49 % and 2.30% in the last three months and six months, respectively. The stock is available at a price to earnings multiple of 8.410x on its trailing twelve months (TTM) EPS basis.