The Real Estate index, which was on a growth streak on the ASX for five consecutive days till 17 February 2020, slipped down on Tuesday’s (18 February 2020) trade with a fall in some of the stocks constituting the real estate index.

Several real estate players released their financial results for the period ended 31 December 2019 and the effects were seen on the stock performance and the overall index results at the end of the day.

However, on 19 February 2020, both the indices recovered and settled in the green zone: 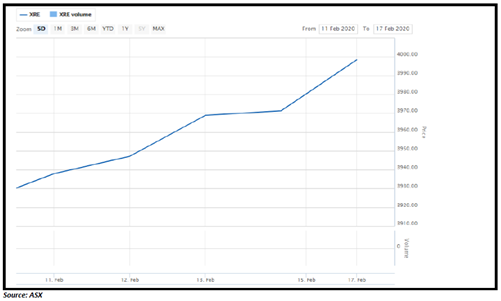 Let us discuss some of the property stocks listed on the ASX.

A diversified property group that operates predominantly in Australia, Abacus Property Group engages in investments in self-storage, office and commercial (retail and industrial) properties to derive rental and fee income, and participation in property developments to obtain interest income and development profits.

The company released its 1H FY20 results on 18 February 2020 with the following numbers recorded during the period:

During the six months ended 31 December 2019, the company acquired (or contracted to acquire) over $600 million of business altering investments and has expanded exposure to its principal focus sectors of Self-Storage and Office via a string of acquisitions and joint ventures. 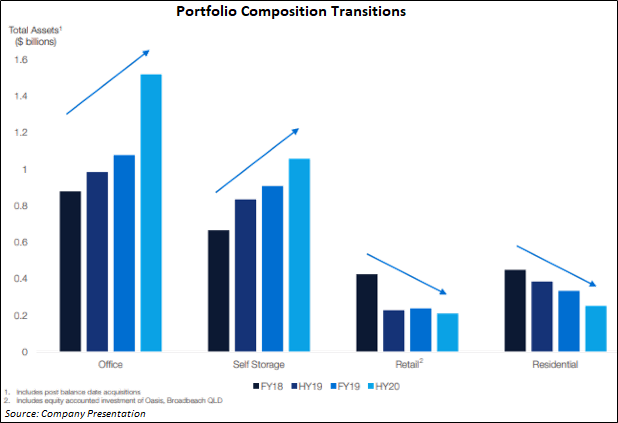 Abacus remains positive on its outlook and market differentiated AREIT positioning in the Self-Storage and Office sectors. The company believes the amalgamation of cautious investment and active management in the two sectors will drive attractive risk-adjusted returns for the stakeholders in the medium to long term.

Owner and operator of well-known living centre portfolio in Australia and New Zealand, Scentre Group has retail real estate AUM worth $56.0 billion and has Funds from Operations (FFO) amounting to $1.345 billion.

The company announced the following results for FY2019:

The number of annual customer visits crossed 548 million. The steady performance has been a result of the company’s portfolio strength, coupled with its leading operating platform, representing an increase of more than 12 million visits.

Scentre is currently and continuously engaged in innovating the ways to engage with its customers and employing new technologies to enhance its direct engagement with the consumer.

The Scentre Group’s business has endured through 60 years to continually adapt to be at the forefront of consumer change.

Ingenia recently announced its results for the half-year ended 31 December 2019 with the following highlights:

Post the purchase of two established communities in the first half, Ingenia believes it has opportunities to acquire existing assets. It announced the acquisition of an attractive community, Lake Munmorah Residential Resort, which further develops its presence in the NSW Central Coast.

As one of Australasia’s leading self-storage providers, National Storage REIT offers several tailor-made solutions to residential and commercial customers. The company, created in 2000, was listed on the ASX in December 2013.

The company recently acknowledged the receipt of:

Both Warburg and GAW are presently conducting their non-exclusive due diligence separately including review of confidential information provided by NSR and is in discussions with the NSR management and its advisors.

The company is working closely with the three parties about the proposals to acquire NSR. At present, the discussions are in an initial stage and are subject to several conditions.

Melbourne based developer, owner and manager of affordable independent living residential land lease communities, Lifestyle Communities Limited, achieved a net profit after tax attributable to shareholders of $15.1 million for the first half of FY2020, compared to $21.9 million in the pcp.

The company believes that currently, nearly all its projects remain on track to meet their long-term settlement and completion targets.

The company’s balance sheet looks well-positioned to provide for future growth and the company shall continue to apply its disciplined site selection process in a few opportunities that are currently in the pipeline.

Entering the second half of the year, the company looks well-equipped with enough forward sales to meet its settlement guidance. Also, the company recently acquired new sites in St Leonards and Pakenham and continue to investigate site opportunities in Melbourne’s key growth corridors.

The company shareholders are expected to receive an interim fully franked dividend of 3.0 cents per share, with a record date of 6 March 2020 and a payment date of 3 April 2020.