In the recent past, most of the financial businesses with well managed product portfolio have reported decent business growth, while the stock market reacted in a similar fashion. Due to the positive earnings growth, these companies have  been able to deliver healthy dividends to its investors. Investors do look out for the dividend history of a company as it provides a guidance to the effectiveness of management of these businesses. The investment companies reported decent loan growth and higher customer growth in the last reporting period, aided by improved retail expenditure across Australia. We will be discussing five businesses with healthy growth potential.

WAM Research Limited brings to investors a diversified portfolio. This portfolio consists of growth companies which are undervalued.

The company reported an operating profit before tax of $0.4 million and an operating profit after tax of $1.6 million for FY2019. The after-tax figure was augmented due to $1.2 million income tax benefit due to franking credits received on franked dividend income from investee companies. 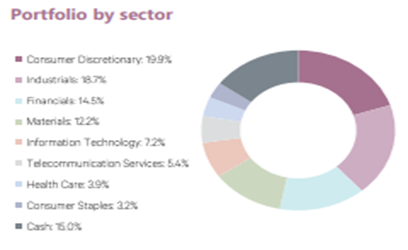 Elanor Investors Group is associated in owning and managing of real estate investment funds and syndicates for the third-party investors.

H1FY20 Operational Highlights for the Period ended 31 December 2019: ENN announced its half yearly results, wherein the company reported Funds Under Management (FUM) of $1,679 million, witnessing an increment of 46.1%, as compared to H1FY19. The business launched two new managed funds during the first half of FY20 and reported a combined gross asset value of $176.8 million as on 31 December 2019. Funds management fees, during the period stood at $8.3 million, up 10.9% on prior corresponding period (pcp) terms, aided by 6.8% increase in FUM from Elanor Retail Property Fund to $343.8 million.

Money3 Corporation Limited provides consumer finance used for the purchase and preservation of a vehicle. On 14th February 2020, the company disclosed the appointment of BDO Audit Pty Ltd as the auditor of the company. 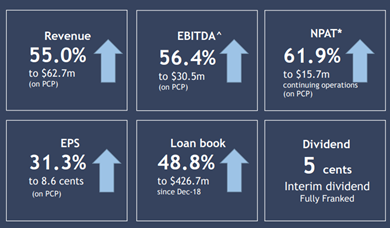 The Management declared a fully franked dividend of $0.0500 per ordinary share, with a payment date of 20th April 2020.

Outlook: The company anticipates FY20 statutory NPAT at higher than $32 million while the company expects its loan book to grow to more than $475 million in H2FY20.

The Board of Directors has declared a dividend of A$0.2700 per ordinary share with a payment date of 9th April.

Macquarie Group Limited is a financial service providing company, which specializes in banking, investing and funds management services. On 17th February, the company informed the successful completion of the bookbuild for its offer of Macquarie Bank Capital Notes 2.

H1FY20 Operational Highlights for the Period ended 30 September 2019: MQG announced its half-yearly results, wherein the company reported net operating income at $6,320 million, as compared to $6,924 million in previous corresponding period. The company reported its net profit at $1,457 million, depicting a growth of 11% on pcp terms. The company delivered strong regulatory ratios, which are way above the minimum Basel III requirements.