5 Economic Gauge Points that are making every Oz dollar count

Australia has had a challenging start to 2020 with the magnitude of destruction from bushfires escalated by the event of coronavirus outbreak putting its economy into a massive jolt and now into recession. After COVID-19, all commodity-based currencies have been struggling due to the disruption in global trade and oil demand slump. This, along with difficulties within the country, has kept the Australian dollar from gaining.

AUD slumped to its lowest levels at 55.1 US cents in mid- March and has been rising sharply recently reaching to a high of US 70 cents on 8 June, up by 27% from its March lows.

Let’s have a look at what is making Oz dollar count:

Iron ore is the major export item of Australia which accounted for about 16% of the exports during the 2018-19 period. When iron ore prices increase, the demand for AUD often rises sharply. China is the major trading partner of Australia. Economic activity in China began to pick pace in March and April after a grim January, which has been helpful to increase the iron-ore demand.

Westpac currency strategist stated that there had been a decent recovery in industrial production while retail spending has been negative in China.

Confidence in the economy

As per Parliamentary budget office projections released on 5 June, the coronavirus crisis will cost the Australian government more than $500 billion of the budget over the next decade adding a significant amount to the government debt. Net debt of the government is anticipated to increase to 15% of GDP or 550 billion Australian dollars by 2029-30.

The report stated that while the budget deficit will peak at $191 billion in FY21 and personal tax collections will fall $ 9 billion in 2019-20.

However, the market remained positive even after the forecast pushing Australian dollar past US 70 cents with the expectation of the currency to move ahead.

As per market experts, part of a contributor to the strengthening of the AUD is due to weakness in USD losing some of its safe-haven status. However, the coronavirus pandemic still has its twists, and the environment remains highly uncertain that puts the optimism into question.

RBA, in its latest monetary policy, left the cash rate unchanged at 0.25%. The cash rate has been record-low for Australia, but the same is not the case for the economies globally. While the US Fed is targeting interest rate to be in the 0-0.25% range, Britain’s central bank benchmark is at 0.1%. However, the key interest rates remain negative in EU and Japan.

RBA governor Philip Lowe stated that the bank is unlikely to take its interest rates into negative territory unlike the central bank of New Zealand which is likely to consider the same. RBA has predicted the economy to shrink by up to 10% in the June quarter, escalated unemployment figures for the next 2 years and inflation to remain subdued for some time. Further, total hours worked fell by 9%, and more than 600,000 people became jobless.

Despite these events, RBA governor stated that the intensity of the economic contraction would be lower than what was anticipated earlier. He added that the rate of new infections had fallen substantially while restrictions have eased earlier than thought and some stability has been seen in May.

Hence, as with interest rates, Australia is in a much less unhealthy situation than global counterparts rendering the domestic currency desirable.

Australia recorded 12 consecutive months of current account surpluses implying more income from exports and investments abroad than its spending on imports and paying out to foreign investors.

As per ABS data, the current account surplus widened to $8.4 billion in the first quarter of the year. 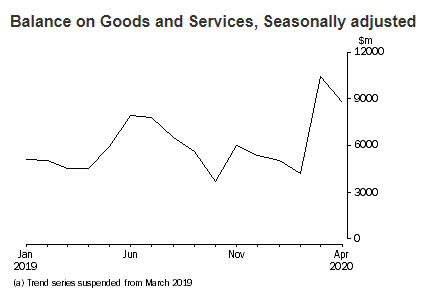 Australia had a current account deficit a year ago, which stopped the currency from gaining.

Market experts believe that there are not a lot of risk-susceptible currencies that are supported by a surplus in the current account. This is very unusual for Australia, and the dollar is not as likely to be hit by fluctuations of the investor sentiment.

Analysts argue that due to the continued ban on arrivals from overseas, the medium-term view for service exports is difficult. There are expectations of impact on imports to be more than exports in the near term.

Hence, the current account surplus will help the currency more than a deficit.

A faster reopening of Australian economy than initially expected and subsequent pick up of the economy as more people are now allowed to travel, gather and socialise has put Australia in a favourable position with its government recalibrating its fiscal stimulus.

After the revelation that JobKeeper will cost about $60 billion less than initially forecasted with the stimulus to stop in September and assertion by Governor of RBA to extend the scheme, has forced the government to take new stimulus measures.

ALSO READ: Whats Buzzing on Economic Front; Are there Any Bright Spots?

The Federal government has proclaimed to offer cash grants for home renovations to lift the construction sector. It is also looking to help the arts and entertainment sector as many workers have lost on $1500 fortnightly Jobkeeper wage subsidy. PM Scott Morrison has also announced on taking targeted measures instead of economy-wide interventions.

Hence the measures can have a positive effect on the investment that comes in and increasing the value of the currency.

There is a lot of potential for the negative shock of US-China trade war and the threat of the second wave of coronavirus.

Westpac expects the Australian dollar to reach US 68 cents at the end of 2020 but with certain caution.

NAB predicts the Australian currency to cross US 72 cents by the end of 2020.