On 5 February 2020, the Company announced to have received a Reserves Report on the project from Netherland, Sewell & Associates, Inc. (NSAI), reclassifying the Bowsprit oil project from Contingent Resources to Reserves, thereby endorsing the fact that the field has reserves. 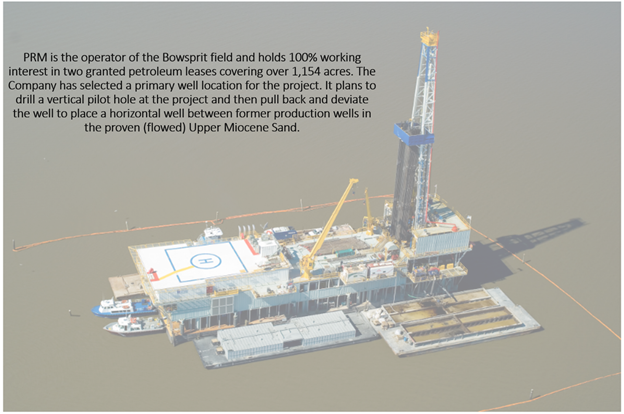 As per the report, the downside risk of drilling at the project is now considered low with potentially significant exploration upside tested by the well.

The de-risked & reserve upgrade follows extensive new work performed by the Company, permitting approval granted for the Bowsprit-1 well, and expected imminent funding and drilling of the well.

Farm-Out Discussions to Conclude in February

Prominence Energy is currently in advance discussions with numerous parties potentially interested in farming into the project.

The reserves certification and associated valuation puts PRM in a stronger negotiating position, as a result the Company is seeking to finalise the farm-out process in February 2020 and select optimum partner/funding option for the Bowsprit well. PRM Managing Director Alex Parks is due to attend NAPE Summit Week in Houston to finalise negotiations with potential Farm-in partners.

The Company expects to start the drilling program at the well in the second quarter of 2020.

The project has access to excellent infrastructure, as the oil can be quickly tied back to and processed by one of the two nearby production facilities and exported as required by barge directly to one of the 18 refineries on the coast of Louisiana.