Based Western Australian; Great Southern Mining Limited (ASX:GSN) is a mining exploration company which aims to create value for its shareholders through strategic acquisitions of projects that are in-line with its current mining assets.

Through its projects in Queensland and Western Australia, GSN primarily focusses on gold, rare earths and copper exploration and evaluation, with its primary focus on its two brownfields assets in Laverton, WA being the Mon Ami and Cox’s Find gold projects.

Here, we shall discuss the Company’s progress during the quarter ended 31 December 2019.

The below figure shows GSN’s project and tenement portfolio at its Western Australia Projects and Queensland Projects as at 31 December 2019. 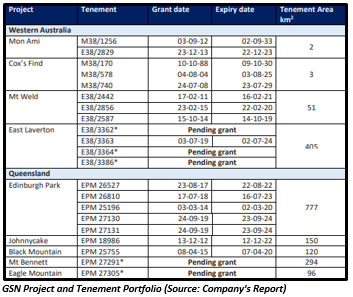 During the quarter the Company undertook its maiden drilling and exploration campaign on the Cox’s Find Gold Project in Western Australia wherein a total of 17 RC holes were drilled for a total of 2,658 metres.

Intersections ranged from <5 g/t to over 143 g/t over 1m downhole lengths in the current drilling program within the main lode. Theseare broadly consistent with the main lode that exclusively supported historical production at the historical mine averaging approximately 22 g/t gold for 76,000 ounces between 1936-1942. These further suggest the potential for the development of 1 or more high-grade shoots within the unmined panels.

Following the completion of the drilling program, notable high-grade interceptions include:

The Company believes that there exists, in the majority of the holes, a distinct halo of gold values that extend for several meters’ marginal to the main lode.

There is evidence of parallel lodes developed above and below the main lode and are up to 3m thick and range from <2 g/t up to 9.75 g/t gold over 2m downhole lengths.

Having achieved the above, GSN believes that the drilling was highly successful and has provided validation for the remnant mineralisation is present in the unmined areas between and below the stoped panels.

Alongside conducting the drilling program, GSN also undertook a high-resolution magnetic and radiometric survey and detailed structural and lithological mapping of the Cox’s Find open pit.

Currently, plans to further test the down-plunge extension with drilling are in the pipeline with the intention to gather ample information in the subsequent campaign to define an initial resource and determine preferable options to exploit the remnant deposit. 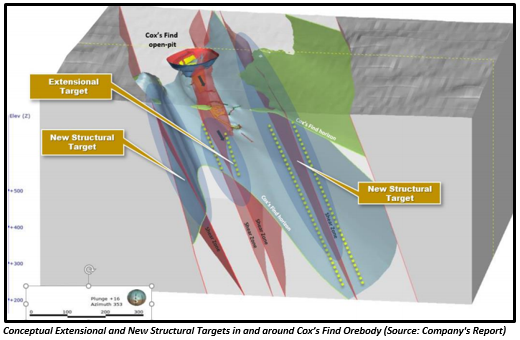 The upcoming drilling program is planned to test the following concepts:

A hyperspectral survey over the Company’s 100% owned Edinburgh Park and Johnnycake Projects in North Queensland co-fund by Evolution Mining Limited (ASX:EVN) was agreed upon by GSN in October 2019.

The hyperspectral survey is designed to gather substantial geophysical data to assist with target delineation and comes off the back of the reconnaissance drilling program which intersected a significant zone of well-developed, high-sulphidation epithermal-style mineralisation below the surface of the main outcrop discovery.

The results of the hyperspectral survey are awaited, and GSN is currently planning an extensive geological mapping and geochemistry program, aided significantly by the detailed geophysics to delineate structures and define size potential and further provide solid drilling targets for 2020.

On the Corporate Front, the Company in October 2019 raised Total funds of $1.485 million (before costs) through a placement to institutional and sophisticated investors of:

During the same time, GSN completed the placement of 17,548,997 Shortfall Options from the Entitlements Issue which was completed in September 2019 and raised $175,490 before costs.

During early November, GSN issued to consultants under the Company’s Long-Term Incentive Plan: