The below-mentioned stocks have made progress on the operational front in the recent past. Let’s look at 3 stocks with their latest updates and stock performance.

As per the release dated 11th April 2019, the company entered into acquisitions agreements and agreements for senior finance facility. Furthermore, TOM acquired Rent Book with unexpired cashflows of around NZ$5.1 million and a total re-sign value amounted of more than NZ$10.1 million. Earlier, the company entered into another binding conditional agreement with FE Investments Ltd for new senior debt funding package of around NZ$12.65 million. TOM is likely to raise $5 million to $6 million by offering secured convertible notes. Tomizone Limited will utilise the amount raised from senior debt facility and convertible notes offer to settle the acquisition amount of Rent Book and to repay all of its existing secured debts.

For the half year ended 31st December 2018, the company reported revenues of $3.041 million, reflecting a rise of 81.2% on pcp and posted loss after tax attributable to members of $1.517 million. Tomizone reported (NTA) net tangible assets per security of -2.08 per share against -2.45 on pcp.

The net cash used in the operating activities amounted to $0.409 million, including $1.038 million of product manufacturing and operating costs and $0.568 million of staff costs.

Esports Mogul Limited (ASX: ESH) is involved in software and esports media business. Esports Mogul Limited was officially listed on ASX in 2011. On 9th July 2019, the company updated the market that it anticipates the roll out of Mogul Organiser Hubs technology in August 2019. Moreover, one of the world’s most recognisable esports brands, Team Alliance, will be the first user. The company will be revolutionising its esports brand marketing and esports tournaments through Organiser Hub technology to be a premier destination for gamers and fans of esports.

In another announcement dated 4th July 2019, the company highlighted that it has successfully hosted Australian Apex Open Tournament, wherein more than 3,850 Apex Legends games were played. The company witnessed strong growth in brand awareness as well as in users on the mogul.gg platform.

The company in another update informed investors that MMR Corporate has been appointed as an Advisor to increase market awareness and to develop its international corporate market profile. MMR will be Media and Relationship advisors for the company. Subsequently, the company appointed Mark Warburton as Chief Marketing Officer.

In parallel, the net cash used in the operating activities for the quarter ended 31st March 2019 amounted to $1.241 million after settling the payments for advertising and marketing and staff costs of $0.678 million and $0.207 million, respectively. Some of the famous PC game titles added to the company’s portfolio consists of StarCraft II, with 8.3 million hours watch time on Twitch in March 2018, Call of Duty: Black Ops 4, with US$500 million sales worldwide and Overwatch with more than 40 million players worldwide. The company is focused on increasing the monetisation via activities with local and international esports teams. 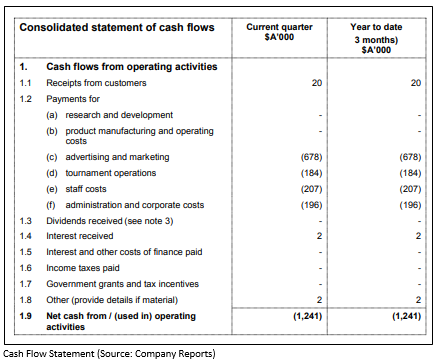 A provider of online gaming platform, Emerge Gaming Limited (ASX: EM1) is an Australia registered company. Emerge Gaming was officially listed on ASX in 1971. On 10th July 2019, the company released a notice of initial substantial holder, wherein it has outlined that VBS Exchange Pty Ltd has become substantial holder of EM1, with voting power of 7.03% on 8th July 2019.

On 9th July 2019, the company updated the market about ArcadeX development that ArcadeX mobile app has been approved and accepted by Android Mobile and iOS App Stores. The ArcadeX App soft rollout began with platform live and is available on App Stores in selected test markets, including India and South Africa.

Previously, in another announcement, the company highlighted that it has entered into an agreement for the development of Nickelodeon eSports Gaming Platform with Viacom International Media Networks Africa (Pty) Ltd. In addition, the launch of eSports product, namely “NickX” will be maintained and operated by EM1. The new eSports product will be freely accessible via Nickelodeon website, Android and iOS apps.

The company provided an update on the quarter ending 31st March 2019. During the quarter, the company successfully completed the placement of $1.8 million by issuing 60,000,000 shares at a price of 3.0 cents per share in order to support the ArcadeX rollout and also completed the launch of VAS model throughout Africa. The net cash used in the operating activities for the period stood at $0.402 million, including research and development expenses and staff costs of $0.140 and $0.121 million, respectively for the quarter ended 31st March 2019. The cash balance of the company during the quarter amounted to $1.95 million. EM1 aims the cash outflow of around $140,000 per month to maintain its operations. The current ratio of Emerge Gaming Limited stood at 8.90x in 1H FY19 as compared to 0.73x on pcp basis, which represents that EM1 is improving its capability to meet its short-term obligations. 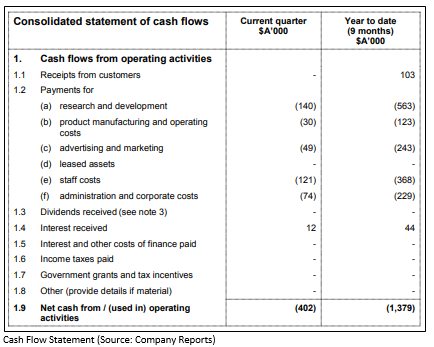