Bodycote Plc is the FTSE 250 listed Company, which is the the world's leading provider of heat treatment and specialist thermal processing services. It provides manufacturing process for market sectors, including aerospace and defence, automotive, power generation, oil & gas, construction, medical and transportation. The Company is the leading provider of thermal processing services in the world, having its operations in more than 180 locations in all the major manufacturing regions of the world, from California to Japan and from Mexico to Finland.

The global market for heat treatment is estimated to be above £20 billion per annum, of which less than 20% is consumed by the sub-contractors, with the balance getting processed in manufacturers’ in-house capacity. The industry further enhances in-use characteristics, particularly in severe environments such as in aircraft engines and in sub-sea oil & gas applications. Hot isostatic pressing uses very high pressures in addition to a high temperature to achieve engineering outcomes that are impossible by other methods.

With regards to its financial position, the net debt has shown significant rise to £46.6 million as of 31 October 2020 when it is compared with £23.6 million as of 30 June 2020 due to  £25.1 million payment of the deferred 2019 dividend in September 2020 and £4.0 million of expenditure associated with the restructuring programme in the period. As a part of restructuring programme of AGI business, Bodycote's headcount has reduced to 4,813 FTEs as of 31 October 2020 when it is compared with the proforma FTEs of 5,764 at the beginning of the year. The Company has announced the payment of an interim dividend for 2020 of 6.0 pence to be paid on 12 February 2021. 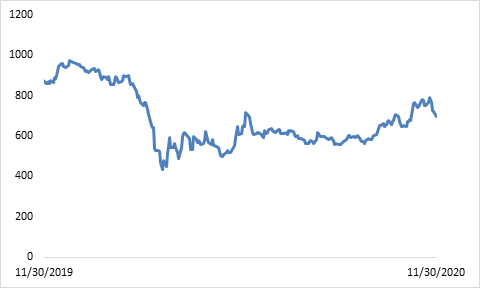 The Company is expecting its civil aerospace market to remain at lower levels for the next 18 months. The AGI business segment has seen good recovery due to benefit from the step-change improvement in the quality of this business.The Company is consolidating its ADE business segment with significant expansion having itskey focus on the restructuring activity. The Company is also taking necessary actions to improve the business in the short-termwhile protecting itscapability to take advantage of the upturn.