The UK’s aerospace and defence (AD) is a vast industry, with aerospace ranking second only after the US and expected to grow substantially in the coming decades. Continued technology developments in information technology (IT), cybersecurity, analytics, intelligence systems, and robotics, coupled with the rising investments in the AD sector, is expected to open up new opportunities for leading aerospace and defence companies.

During the covid, the sector got severely impacted due to demand-side depression; however gradually, demands are improving. Investors are often lured by the long-term growth prospects vested in aerospace and defence stocks. 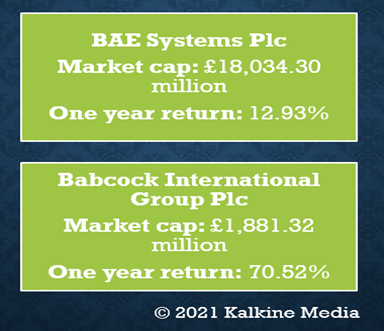 BAE Systems is UKdomiciled security, aerospace and arms company and a leading defence contractor in Europe. Recently, it was awarded an £85 million ($116 million) contract to develop an advanced tech submarine for the Royal Navy.

BAE Systems declared an interim dividend of 9.9 pence per share for the period.

The shares of the company returned 12.93% in the last one year to shareholders.

Babcock International Group is a UK-based provider of services to the defence, aerospace, and nuclear engineering industries. Recently, it announced the sale of its 15.4% stake in AirTanker Holdings to Equitix Investment Management Limited for £126 million. It also sold its Oil and Gas aviation business to CHC Group for £10 million.

The shares of Babcock International Group closed at GBX 372.10 on 22 September 2021. The market capitalisation of the company stands at £1,881.32 million.

For the year ended 31 March 2021, Babcock International recorded revenue of £4,183 million compared to £4,429 million in the previous year.

The shares of the company returned 70,52% in the last one year to shareholders.