Global markets zoomed higher post Caixin/Markit Manufacturing Purchasing Manager’s Index (PMI) of China surged to 51.8 in November 2019, against 51.7 mark recorded in the corresponding period of the last month, which reflects the fastest expansion since December 2016.

The threshold of 50 points distinguishes contraction from expansion on a month-to-month basis.

Beijing’ factory activity reported classical signals of improvement in November 2019, with growth surging to about three-year highs, strengthened by upbeat Chinese government data which was released on November 29, 2019.

However, several analysts are worried about deflationary risks, and not sure whether the worst is behind the Chinese economy as they commented that the sub-indexes of both surveys posted a patchy improvement which is difficult to sustain.

Meanwhile, official Chinese Manufacturing PMI data which was reported by National Bureau of Statistics of China as on November 29, 2019, also surprised the market, as it returned to expansion for the first time in the past seven months as demand in the home country recorded an uptick. But gains were few and far between, and export orders were not gaining steam. 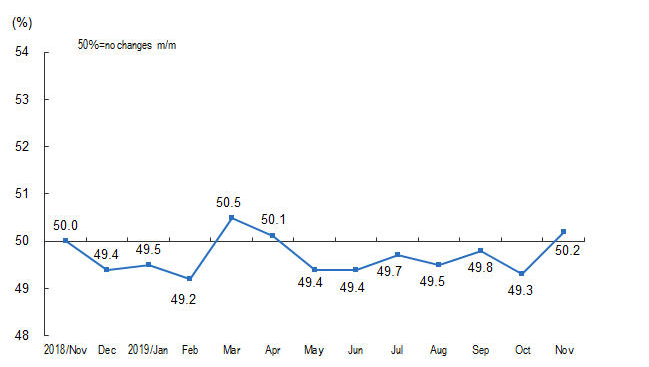 Out of five sub-indices that constitutes PMI, the production index, new orders gauge, and supplier distribution time index was relatively higher against the previous comparable period and also above the threshold mark of 50 as well. However, the employment index and raw material inventory index reported contraction and stood at 47.3% and 47.8%, respectively. A mark below the threshold 50 reflects contraction.

Meanwhile, China’s Non-Manufacturing Purchasing Managers Index reported a growth of 1.6 percentage points against the corresponding previous month and stood at 54.4%, which reflects that the overall non-manufacturing activities continued to expand, and growth accelerated as well.

Within the non-manufacturing businesses activity, index of service industry recorded a decent growth of 2.1 percentage points against the previous comparable period to 53.5%, which shows that the activities of the service sector have gone up.

Well, many argued that trade escalation between the US and China is not going to soften easily as leaders of both the World's large economies given radical comments recently, which shows that Phase-1 trade deal between both the nations would be temporary and could escalate in the forthcoming period.

Recently, US President Donald Trump jolted markets by signing the Hong Kong Human Rights and Democracy Act, and together with this, he had also avowed not to supply crowd control tear gas to Beijing, which acted as a further abatement over the already distorted relationship between the US and China.

However, a school of experts said that Phase-1 deal between the US and China could boost global growth and demand outlook after months of contraction in growth and demand as well. And it will boost Chinses export, which is trending into a downtrend since year-over period.

Post a positive manufacturing PMI number reported by China, the International Crude benchmark Brent Crude Oil soared up to $61.87/bbl and up by $1.39 points or 2.31%, in the day’s trade.  This was the highest one-day surge after November 21, 2019. During the day session (before the market close), Brent Crude registered an intraday high of $62.05/bbl and a low of $60.73/bbl respectively.

Improving Chinese manufacturing PMI reflects energy demand could increase in near-term after months of sluggish demand trend in Crude Oil, which sent prices lower over the past couple of months. During the year-over period, Brent Crude Oil prices fell off as much as to $49.93/bbl.

However, investors are still eyeing for a better trade deal between US-China in coming days, so that growth cycle could get a kickstart.