How Anti-Chinese Sentiments Are Shaping Facebook vs TikTok Battle

ByteDance, owner of the short video-sharing platform TikTok, has been fighting battles on multiple fronts. One on hand, it is getting ready to sue the Trump administration that demands its US assets be sold, on the other hand, it is busy fending off global privacy advocates worried about Chinese government’s access to its user data. Then there’s the surging techno-nationalist sentiment that threatens to limit its market share on international soils. Adding fire to all this are recently surfaced reports that allege rival Facebook had stoked Washington’s fears against the Chinese technology giant.

It seems like TikTok just can’t catch a breath! But is FB justified in it’s growing fear against the Beijing-based app?

TikTok’s showdown with Facebook has been going on for a while now. The face-off began with the jazzy filter and lip-syncing video app’s popularity with teenagers that sparked panic among its Western rivals and policymakers.

In 2019, TikTok and its Chinese counterpart Douyin emerged as the world’s second most downloaded app– right between FB-owned WhatsApp at the uno spot and Facebook at number #4 and Facebook-owned Messenger at number #3. The findings, released by intelligence firm Sensor Tower, claimed the Chinese tech giant’s revenues were US$ 40 million in December 2019 alone.

In last two years, TikTok emerged at Generation Z’s favorite social app. While Facebook and FB-owned apps continue their world dominance, it is wary of the rising threat from the East.

Last fall, Facebook CEO Mark Zuckerberg – the fourth richest man in the world – took on China over its commitment to free expression. That speech indirectly pointed towards Chinese internet companies and how they can be a threat to American values and its technological supremacy.

And now it has emerged, Zuckerberg also held closed door meetings with US lawmakers arguing that Chinese tech companies like TikTok and WeChat are a threat to American counterparts. 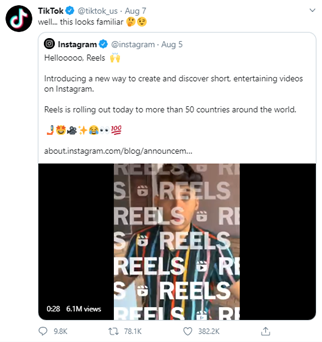 At the center of all these tech wars is the increasing hostile sentiment against China – the second largest economy of the world after US.

Under President Xi Jinping’s leadership, China has erected barriers with almost every country in the world – a cold war with the US, simmering tensions with UK, Canada and Australia. Things aren’t so smooth in the Asian continent either with an ongoing border conflict with India, muscle flexing in South China Sea, high tensions with Taiwan, Hong Kong and Japan.

The Trump administration, which views China as a national security threat, imposed a ban on telecommunications giant Huawei due to its alleged connection to the Chinese government. It is now pushing Canada, UK, EU and several other nations to stop the “infiltration” of the “communist” China’s "totalitarian" ideals.

Also under scrutiny, is Beijing’s One Belt One Road (OBOR) global infrastructure initiative, which seems to rely on projects funded by Chinese loans to host countries that has left a trail of debt-ridden nations. Economists fear this could trigger a domino effect of strained economies that can curtail global economic growth.

For decades, China’s growth as the number two economy of the world has been fueled by two key drivers. One, an export-oriented economic model that has made it the world’s factory, and two, an infrastructure-driven domestic growth.

As both these drivers slow down, China is on the prowl for its next economic driver and the rise (and spread) of home-grown technology and internet firms has been one of the emerging engines.

Now, add to all the above, COVID-19. China received immense criticism and global backlash for its mismanagement of the coronavirus, which has now swelled into a global pandemic.

India was the first country to ban TikTok and 58 other Chinese apps over security and espionage concerns amid the ongoing border standoff between the two nations. The US quickly followed, limiting or banning Chinese apps’ operations on American soil.

If you land up in any part of China, you won’t be able to use Google, Facebook or YouTube.

Welcome to China’s strict control and censorship of domestic internet!

China and its technology companies have been retaliating against the growing ban (against Huawei and TikTok). But the east Asian economy hasn’t played fair.

Concerns have further grown about Chinese censorship amid the ongoing pro-democracy protests in Hong Kong.

Despite the Chinese threat and its closed markets, tech titan Facebook cannot escape the increasingly loud voices against its “anti-competitive” practices.

During the US Congressional hearings, an anti-trust panel put the spotlight on Facebook for “neutralizing” competitors such as Instagram (now owned by FB) and copying rival’s features as a means of intimidating them into buyout.

For now, ByteDance is in talks with potential investors to divest TikTok’s North American arm before the November 12th deadline imposed by Trump administration. Microsoft and Oracle are rumored to be in the running. A new report suggests Google parent Alphabet also looked into a stake in the short video-sharing app.

Facebook may have won a minor round with TikTok’s scrutiny in US and launching a copycat product – Instagram Reels. But the future won’t be easy for this tech giant as it navigates growing scrutiny while maintaining a robust bottom line.