Amid the signs of growing optimism among the businesses following a successful vaccination drive, there is another good news for the nation, trade between the UK and EU, after witnessing a sharp fall in January, a month just after the Brexit, is now seeming to be gradually moving back to normalcy and has recovered partially in the month of February.

As per the data released by the Office of National Statistics (ONS), the UK’s exports of goods, excluding non-monetary gold and other precious metals, to the EU increased by 46.6 per cent or £3.7 billion, after witnessing a sharp fall of 42 per or £5.7 billion in the month of January. The rise in the exports to EU was mainly led by the machinery and transport equipment as well as chemicals.

Imports also showed signs of picking up, though the momentum was not that strong of Exports. Imports of goods from the EU, other than non-monetary gold and other valuable metals, improved by 7.3 per cent or £1.2 billion after suffering a slump of 29.7 per cent or £6.7 billion during the month of January.

For February 2021, barring non-monetary gold and other precious metals, UK’s total trade deficit, increased by £0.5 billion to £1.4 billion of which imports showed a rise of 6.5 per cent or £2.9 billion, while exports were up by 5.4 per cent or £2.3 billion. 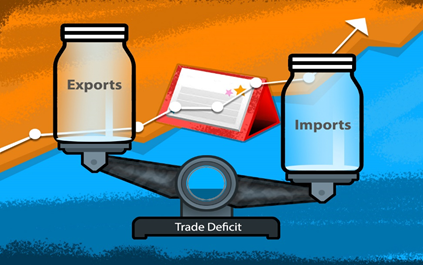 For the three months period to February 2021, the total trade deficit, (barring non-monetary gold and other valuable metals), shrunk by £2.1 billion to £6.3 billion as imports reduced by 3.8 per cent to £5.7 billion and the exports decreased by 2.5 per cent to £3.6 billion.

Though the trade in services surplus posted an increase of £0.1 billion in the three months to February 2021, on the back of 0.7 per cent improvement in imports and 0.5 per cent increase in exports, but trade in services imports and exports have continuously been on the lower side since Q2 2020 as they comprise of travel and transport trade, which remained impacted by COVID-19 restrictions.

Meanwhile, ONS in a separate release has stated that the UK economy grew by mere 0.4 per cent in February. Also, as per the data of the official agency, the economy was still 7.8 per cent lower than a year earlier.