What to expect from a future of climate change?

Human activities are one of the main reasons for the increasing greenhouse gases in the air. In this article we will learn what to expect from a future of climate change.

Climate change will affect ecosystems, water resources, food supply, and infrastructure. Canada is experiencing climate change in many parts of the country, and it is anticipated that its impact will increase in the future that will include the following changes

Why is the warming rate of Canada more than twice the global rate?

The climate change response varies in different regions. Therefore, rates of warming vary across the world. For example, the melting of snow and sea ice in Canada is reducing the surface’s reflectivity and causing the surface to absorb more energy from the sun. That’s why Canada is warming more quickly than the whole world.

The oceans around Canada are getting warmer, acidic, and less oxygenated. If greenhouse gases emissions continue to rise, then ocean warming, and acidification will intensify in the future and will impact the life of the marine ecosystem.

The increasing precipitation is evident in most of Canada and causes less snowfall and more rainfall. It is estimated that annual and winter precipitation will increase across Canada and summer rainfall will decrease in some areas of southern Canada.

Also read: How Russia-Ukraine war could hamper the combat on climate change

A warming climate will contribute to more extreme heat in the future that can increase drought and wildfire risks. Drought caused by heat waves can put Canada’s people and environment at risk.  The Beaufort Sea and the Baffin Bay are two of the Canadian Arctic marine areas that are projected to experience extensive sea-ice-free conditions in the future.

The local rising sea level is projected to intensify coastal flooding. The increased flooding can impact most of the Atlantic and Pacific coasts and the Beaufort coast in Canada. The melting of sea ice in the Arctic and Atlantic can bring destruction to coastal infrastructure and ecosystems due to larger storm surges and waves.

Also read: How are Arctic animals in Canada affected by climate change? 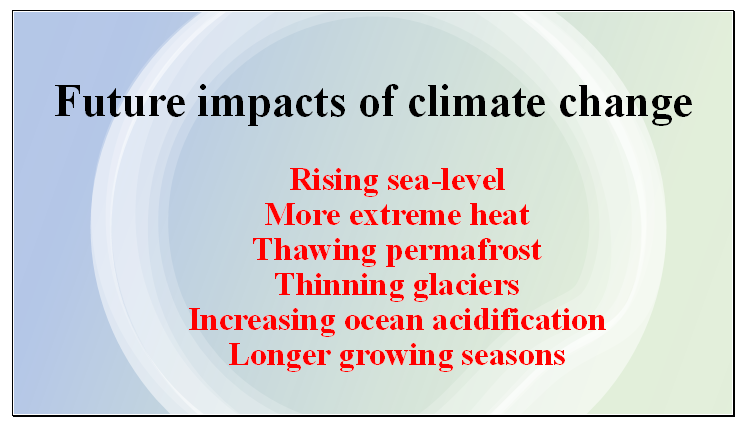 Greenhouse gas emissions in the air can make heat waves more extreme in the future. It is estimated that the daytime and night-time average temperature will intensify across Canada due to heatwaves which can badly affect human health and can cause severe illnesses, and death. It can also affect mental health that will cause anxiety disorders and psychological distress.

Heatwaves due to climate change can make diabetic or kidney patients more vulnerable to dehydration. Seniors, people with disabilities, pregnant women, residents of northern and remote communities, Indigenous peoples, youth, and children could be at high risk due to climate change. Heat events in Canada have killed over 280 people in Quebec (2010), 595 people in British Columbia (2021).

Longer summers and milder winters and changes in precipitation patterns are projected to increase the growth of certain pathogens or vectors. These pathogens can impact human health and cause fungal, viral, bacterial, and parasitic diseases.

Changes in precipitation and temperature can reduce water quality and increase the risk of flood and drought. Climate change can cause various water-related health risks including giardiasis, cryptosporidiosis, and campylobacteriosis.

Climate change is projected to intensify natural hazards, including droughts, severe storms, floods, extreme heat events, and coastal erosion that could cause destruction of property, infrastructure, and disruptions to the economy. It can also cause death and injury.