What are some climate change actions taken by Canada’s provinces?

The various regions in Canada are already facing the adverse effects of climate change such as rising sea levels, flooding, increasing temperatures, and coastal erosion. Heatwaves and ecological changes can cause health-related illnesses and vector-borne diseases in Quebec and Ontario.

British Columbia and Alberta can face adverse impacts on their critical infrastructure due to increasing droughts, forest fires, landslides, and coastal erosion. So, provinces and territories in Canada can face different impacts due to increasing climate change. Today in this article, we will discuss some actions that Canada’s provinces and territories are taking to tackle climate change.

To reduce greenhouse gas emissions in industry, transportation, communities, and buildings and to achieve the target of reducing emissions to 40 per cent below 2007 levels by 2030, 60 per cent by 2040, and 80 per cent by 2050, this province has incorporated a CleanBC Roadmap which includes policy measures and investments. The CleanBC Roadmap to 2030 will be helping in meeting the new net-zero target by 2050.

Alberta is planning to lower methane emissions derived from oil and gas production to 45 per cent below 2014 levels by 2025. It is also focusing on generating 30 per cent of electricity from renewable sources by 2030 through the Renewable Electricity Act (2016).

Alberta’s Technology Innovation Emissions Reduction (TIER) is considered a keystone for the emissions management system in Alberta which is applied to conventional oil and gas sites and large emitters.

To support energy efficiency, carbon capture, and increased methane management, the government of Alberta has declared an investment of up to $750 million from the TIER Fund.

To support the development of future climate programs, partnerships, and policies, the government of Alberta has worked with Indigenous communities, industry and municipal stakeholders, and experts.

The Climate Resilience Measurement Framework is focused on monitoring resilience-related progress in the following areas:

Also read: What is Intergovernmental Panel on Climate Change (IPCC)?

This province is focused on creating a Hydrogen Strategy that will be supporting the transition to fewer fossil fuels and reducing greenhouse gas emissions. To support organic waste diversion from landfills to lower future methane emissions, Manitoba’s Government has incorporated a Green Impact Bond.

The government of Ontario is focused on lowering emissions to 30 per cent below 2005 levels by 2030.

Quebec is focusing on lowering its greenhouse gas emission to 37.5 per cent below 1990 levels by 2030. This province has established a 2030 Plan for a Green Economy, an electrification and climate change policy framework in November 2020. This plan will be helping Quebec to meet its greenhouse gas emissions reduction target by 2030. This action plan will focus on the following: 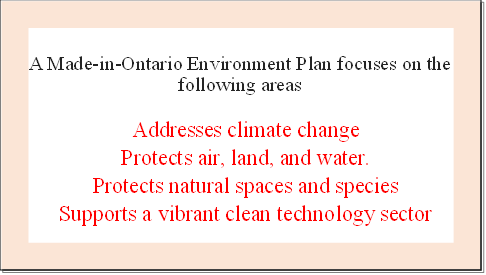 Increasing greenhouse gas emissions will cause a change in precipitation patterns, harsh weather conditions, water crisis, droughts, and heatwaves and will badly impact human health and animals and their habitats. This is becoming a threat to Canada and the whole world.  So, contributing to lowering emissions and saving the planet is the responsible thing to do. We can do this by using sustainable transportation, reducing waste, preventing water pollution, and using renewable resources.