How Russia-Ukraine war could hamper the combat on climate change

War brings destruction to the environment, wildlife, habitat, and infrastructure. Military vehicles, explosive weapons, aircraft, vessels, and chemical spraying emit greenhouse gases which can contribute to climate change. In a war, pollution spreads in the air and water, people and animals lose their lives and human beings suffer from illness.

In the war between Russia and Ukraine explosion sounds were heard in the Kyiv and Kharkiv regions of Ukraine, and Russian weapons have also damaged airbases and air defenses of Ukraine. On the other hand, Ukraine also claimed that it has destroyed five Russian planes and a helicopter.

In this article, we will explore how the Russia-Ukraine conflict could affect climate change.

The ongoing conflict is already probably affecting the economy. The conflict could bring destruction to the environment and the biodiversity.

Ukraine accounts for six per cent of the area in Europe, it holds 35 per cent of Europe's biodiversity. The impact might be seen across northern Europe and Russia’s ecosystems.

Ukraine, in 2016, discovered that groundwater pumping had stopped in 35 mines which caused flooding in the mines. Such floodwater can include toxic substances such as arsenic, mercury, and lead which can pollute groundwater.

In 2018, Ostap Semerak, an ecology minister in Ukraine cautioned about a potential “second Chernobyl.” In 1986, the Chernobyl disaster impacted one-tenth of land by radiation in Ukraine. Even today, Ukraine releases organic compounds and polluted water into the Black Sea.

Since the fall of the Soviet Union, the relations between Ukraine and Russia have become stressful. The repeated clashes have already had an impact on the environment.

High gas prices have already encouraged production and consumption of dirtier fuels, which is causing global warming. For example, in comparison to the previous year, the importing of coal into the European Union in January had increased 56 per cent.

To increase the coal output by 40 million tons in the next two decades, the Coal Authority in Britain permitted a mine in Wales. Australia is also planning to establish and expand more coking coal mines. China has also increased its coal production and agreed to three new billion-dollar coal mines.

Also read: What is Canada doing about plastic waste?

Militaries need large land and sea areas for setting up their bases and use various resources such as hydrocarbons and rare earth elements. The use of military vehicles, aircraft, and vessels in any kind of war release carbon dioxide in the air, impact terrestrial and marine habitats and cause chemical and noise pollution.

Other than nuclear weapons and explosives, conventional weapons also bring damage to the environment, and weapons that are left after the war can be used for hunting animals if they fall into the wrong hands. High-intensity conflicts use a large volume of fuel that can contribute to climate change by emitting carbon dioxide.

Also read: What are the key climate change issues in Canada? 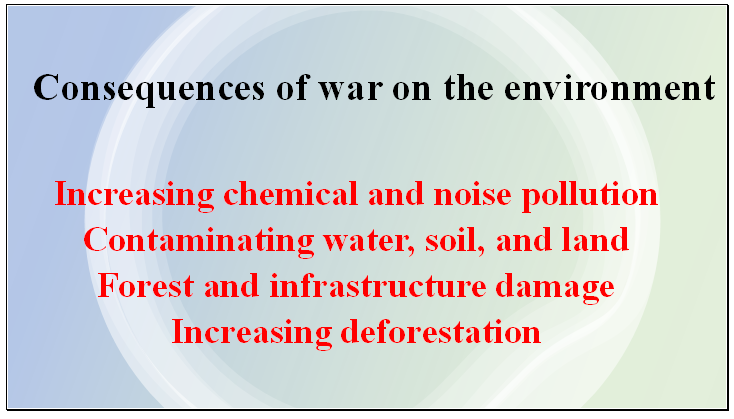 Intentionally or unintentionally, the weapons and explosives used in war have always impacted the environment. Soil and water sources can become polluted and affect wildlife. Warfare can contribute to climate change with greenhouse gases and areas of forest and infrastructure destroyed.