How are Arctic animals in Canada affected by climate change?

Arctic animals can survive in harsh Arctic ecosystems but increasing climate change is impacting their survival. The Arctic region of Canada is home to many Arctic animals, including whales, fish, seals, fish, and others.

How does climate change impacts animals?

Arctic animals like polar bears have some features that help them to survive in Arctic conditions. Their white fur and black skin absorb heath and keeps them warm in the Arctic cold.

Some scientists drew parallels between them and marine animals like whales and seals who spend their life in ice-covered waters. Spending some part of their life in the water does not mean they don’t need Arctic ice.

They are dependent on sea ice for hunting, traveling, and rearing pups. If the sea ice melts, then they will be forced to travel for food and live on land.

Climate change will impact their survival and if no steps are taken about the climate crisis, then the population of polar bears could decrease to over 30 per cent by 2050, said the WWF.

The walrus is a mammal of sheer size and magnificent tusks. It also depends on sea ice for food and rest. But the increasing temperature and the warming Arctic are disturbing their living patterns.

Reindeer uses their hooves to find food in the snow but due to climate change, precipitation and temperature are increasing, which means it will cover the vegetation with ice instead of the snow, which would make grazing harder for reindeer.

Orcas are known as the biggest dolphin in the world. The rapid increase in temperature and shrinking sea ice would make it difficult for these orcas to survive as they could die of starvation due to being unfamiliar with the territory.

Also read: As heatwaves hit Canada, could air conditioning be hurting as it helps? 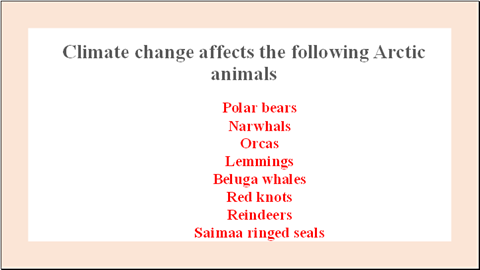 The variations in climate impact marine animals. Emily Giles, a species expert for World Wildlife Fund Canada (WWF) said that certain species are directly and indirectly affected by climate change. For example, West Coast killer whales consume only Chinook salmon, but these salmon are badly hit by the climate crisis and indirectly impact the survival of the killer whales.

Arne Mooers, a biodiversity professor and member of COSEWIC, showed his concern about the Vancouver Island marmot, an endangered mammal of Canada. Wolves, cougars, and habitat loss have decreased their numbers over the years.

Climate change has impacted the marmot’s habitat. The live on mountains slopes. The growth of coniferous trees on mountain slopes can make it difficult for marmots to see their predators.

They also need enough snow for their hibernating process in the winter months, which can become difficult due to warming weather. We can lose up to 97 per cent of marmot habitat on Vancouver Island by 2080 under the worst scenario, according to a COSEWIC assessment and status report.

The Arctic caribou including the Peary Caribou and the Dolphin Caribou in the Canadian Far North, are dependent on sea ice for their migration. But warming weather is making them vulnerable to climate change.

The caribou are famous for their epic long-distance migrations and depend on sea ice to travel for food. But sea ice reduction would bring a drastic change to their migration and survival process, said Emily Giles.

Compared to any other of earth’s regions, the Arctic is warming more quickly. Climate change is putting ice-dependent species, including narwhals, polar bears, and walruses at risk.

Greenhouse gas emissions need to be reduced. We need to save these animals' habitats by reducing carbon emissions into the air, dependency on fossil fuels and apply various ways that can save our planet.