What is Rule of 72 & how to calculate when an investment will double?

Are you curious about when your investment would double? We invest in mutual funds, fixed deposits, and savings to increase our wealth. But how long will it take to see it double.

A method the financial industry uses is the Rule of 72. What is this? How to calculate it? This article will tell you the necessary details of the Rule of 72.

The Rule of 72 is an easy way to calculate at what time your money will be doubled based on the rate of return. It is an estimated time. Investors can use compound interest formulas and excel methods to calculate the estimated value, but all these processes consume a lot of time. The Rule of 72 helps in quickly calculating the approximate value. Here interest rate is the rate of return on investment.

How to calculate it?

Time to double = 72 divided by six percent rate of return

Another example, let’s say that you invested C$ 500 at an eight percent annual rate of return. In this case, see the Rule of 72 to determine how long it would take your investment to double i.e., $C 1,000. 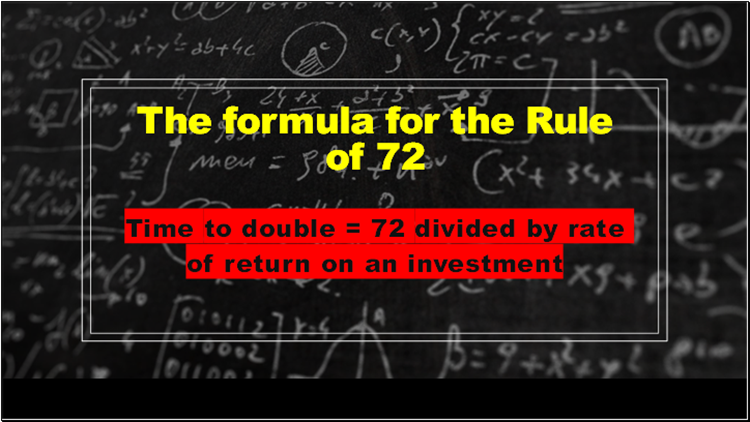 With this rule, you can also determine how much return you need to double your money in six years. By using the formula, you can calculate the rate of return by dividing 72 by years to double.

Here, if you grow at a rate of 12 per cent, then your money is expected to double in approximately six years.

It can be used in GDP calculation, inflation, macroeconomic numbers, population, or anything that increases at a compounded rate. For example, If the population grows at a six percent rate annually, then the estimated time to double is twelve years.

The Rule of 72 can be used in all durations based on the rate of increase. If the interest rate per quarter is six percent, then it is expected to take twelve quarters or approximately three years to double the amount.

If the GDP of a nation increases by two percent per month, then in 36 months or three years, it will double.

The growing of money makes an investor feel anticipation and how long it will take to double the amount also excites. The Rule of 72 provides a rough estimation of time for doubling the money.

However, one can use other mathematical calculations, but it involves complex numbers, terms, and algorithms. The Rule of 72 is considered an easy method that tells you the approximate value without getting stuck in compound interest formulas. One may start their investment plans and retirement plans by using this rule.