What is the Taylor Rule?

The Taylor Rule, also called Taylor’s principle, is an economic model for monetary policy that shows the co-relation between the Federal Reserve’s operating targets, growth in Gross Domestic Product (GDP) and inflation rates. The rule serves as a guideline to US Federal Reserve and other central banks to determine the Federal Reserve Monetary Policy and a fixed rule policy by adjusting interest rates when the economic conditions changes, such as unemployment rate and inflation.

It is a mathematical formula that relates operating target of Federal Reserve for short-term interest rates to the variations between the expected GDP and the actual GDP growth rate, and the variation between expected and actual inflation rates.

Changes in the Rule

The Taylor Rule was founded in 1993 and is named after Stanford economist John Taylor with an aim to adjust the interest rates to stabilize the economy in difficult situation in the short-term, but also to encourage long-term growth. John Taylor continued to perfect the rule and made amendments to the rule in 1999.

In 2003, Cyprus economist Athanasios Orphanides said that the rule will not hold up to real-time data (RTD) and publicized his reservations against incorporating Taylors Rule in policy making.

However, in 2015 US investor William Hunt Gross criticized the Taylor Rule by saying that decreasing the interest rates can’t be a solution of decreased growth and in the same year, formal chairman of the Federal Reserve Shalom Bernanke published an article while supporting the Taylor rule. In 2017, the Financial CHOICE Act authorised a stiff version of Taylors Rule known as Directive Policy Rule (DPR) for the Federal Reserve to follow. 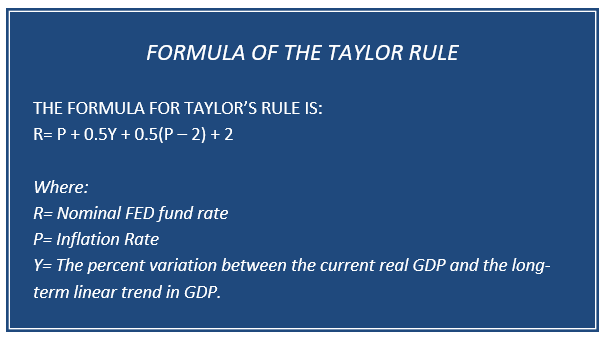 The formula aims to seek the potential targets for interest rate by taking inflation and GDP growth rate in account. to compare the inflation and non-inflation rate economy in term of prices need to consider. The Taylor Rule is usually changed if the central banks introduce important factors.

The Taylor Rule has been criticized several times the most serious was that it can’t account for sudden economic problems, such as Coronavirus pandemic and 2008 financial crisis.  However, John Taylor acknowledged the criticism and pointed out that inflexible adherence to the policy rule may not always be appropriate in sudden economic problems.

Another criticism that was given: how about if the GDP and inflation growth rates move in opposite directions. in case the economy is in stagflation, a situation when there is no upward or downward movement in GDP and the inflation rate tend to rise, the Taylor rule provide little guidance to the as the terms in its formula tend to cancel each other.

There are various issues that are still unresolved, but many central banks around the world find the Taylor Rule a favorable practice and some research also shows as the use of similar rule may enhance the economic performance.

What are penny stocks? How these 10 healthcare penny shares have fared YTD

CFTC vs. SEC in the backdrop of Senate’s bipartisan crypto proposal

Up 14% in six months, can CSL shares maintain momentum on ASX?