What is a sunk cost?

A sunk cost is a cost that has already been incurred by a business or an individual and cannot be recovered by any means. They should not be considered while making an investment decision or while doing any projections.

Since a sunk cost cannot be changed or recovered, businesses do not include them in their financial analysis. However, they continue to be an unavoidable aspect and affect businesses in one way or the other.

Sunk costs are the costs which cannot be retrieved in any way, not even through a resale of the item on which the cost has been incurred. They may not be improved upon in the future and only exist in the financial history of the company.

What are some examples of sunk costs?

Therefore, sunk costs are bound to happen, especially in new businesses. They cannot be eliminated; however, they can be avoided in the future based on a company’s past experiences. However, even if sunk costs have been influenced by a past decision, a firm’s future decisions should not be influenced by them.

What is the sunk cost fallacy?

Sunk cost fallacy is a concept slightly different from the economic concept of sunk costs. Sunk cost fallacy states that businesses might be compelled to go ahead with a decision only because of the sunk costs associated with that decision. This can hurt the business in the long run, as sunk costs should not be used to make future decisions.

As explained, sunk costs are the costs in businesses that cannot be retrieved, while a fallacy is a mistaken belief. Thus, investors and businesses are mistakenly under the false impression that going ahead the sunk cost decision would help the company earn back the money they invested.

This fallacy occurs because people perceive the sunk cost as an investment that has already been made. Thus, they decide to go ahead with it, instead of wasting the amount spent on it. This may not always be beneficial because the sunk cost decision might not be the best decision for the investor to go forward with.

For instance, consider the example of a car manufacturing business that has promised to launch a cheaper variant of one of their existing models after 2 years. However, for some reason, even after two years, the company was not able to develop a cheaper variant. However, the business decides to go ahead with the same decision and announces another date for the launch of the variant.

The logical decision here would be to let the sunk costs go and not let them influence future course of action for the company. If the company realises that a cheaper variant is not achievable in the stipulated time, then investing a little more in it would add to the losses.

What is the sunk cost dilemma? 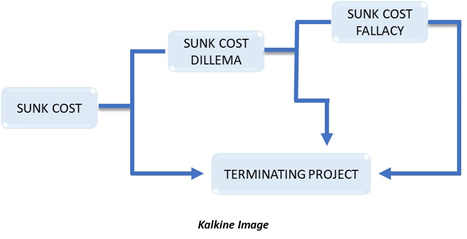 Deciding between terminating the project and adding more investment to it is a crucial decision. The sunk cost theory suggests that, in the above example, the project should be terminated, instead of the company investing more time and money into it.

How are sunk costs resolved?

Businesses should not focus on eliminating sunk costs, rather they should focus on mitigating their effects. Every successful business has many underlying sunk costs that are foregone in building it. Therefore, it is important to not let sunk costs deter the flow of business.

However, it is important to note that businesses may find it easier to avoid falling for the sunk cost fallacy. By feeding previous information into sophisticated models, businesses might be able to decide their plan of action when faced with the sunk cost dilemma.

Together Energy collapse: Which energy stocks you can rely on?