What is meant by Subrogation?

Subrogation is the protection against damage payments that are neither the asset owner’s nor the insurance company’s fault. The term is mostly used in the auto, health insurance and homeowner’s policies. Among these, auto subrogation is most frequently seen.

Subrogation lets one party gain the legal right to “step into the shoes” of another party to bring in claims for damages. However, not all types of property can be claimed under this. 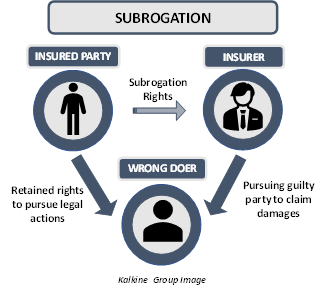 Why is subrogation included in insurance policies?

A subrogation in an insurance policy protects the policyholder when the asset gets damaged for no fault of his own. Thus, the insurer can pursue the person behind the damages to pay for them.

For example, the party at fault would be liable to pay the medical bills as well as repair costs involved in an accident.

A subrogation is successful when both the insurer and the insured get paid for the damages.

How does Subrogation work?

For an insurance policyholder, the policy issuer must pay for the damages incurred by the former. However, under subrogation, the right held by the asset holder over the wrongdoer can be transferred over to the insurance company.

This transfer of right provides exclusivity to the principle of subrogation as it is not otherwise available under insurance policies. The transfer of rights from the insured claimant to the insurance policy issuer is called subrogation. The issuer first pays the insured party and then collects the same amount from the party responsible for the loss. This amount may also be collected from the responsible party’s insurer. Thus, subrogation ensures that both the insurer and insured are reimbursed.

Even though the insurance policy issuer can claim the damages from the third-party, this does not take away the right of the insured party to sue the party responsible for damages.

What is meant by waiver of subrogation?

This type of waiver can come in handy when the party at fault wants to settle the case without any insurers involved.

What is meant by salvage and abandonment?

These are highly important concepts pertaining to subrogation. Salvage refers to the remains after the damage, which happens in the case of partial loss. However, in such cases the reimbursement is only limited to the extent of damages if the asset is not abandoned.

If the insured leaves behind the entire salvage to the insurer, then he/she may receive the entire insured amount. Thus, these concepts greatly affect how much damages need to be paid, making the insurer the complete owner of the asset.

What is the difference between subrogation and contribution?

Contribution refers to the insurer’s own legal rights under the Insurance Contracts Act. However, this does not depend on the rights of the insured party. This only exists when two or more insurance policies are covering the same loss. Here one insurer paying the damages can ask other insurer to pay for the damages too, if required. 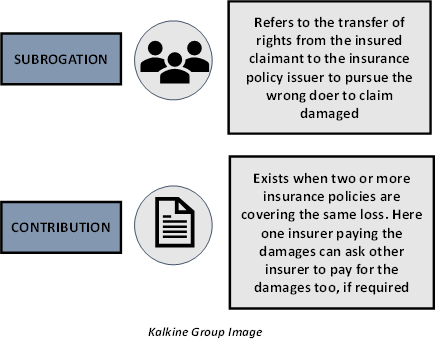 Another major difference that sets contribution apart from subrogation is that it is not easily waived by insurers, unlike subrogation. Subrogation waivers are helpful in removing legal trouble that may be brought on by the insured party. These waivers, however, do not remove the right to contribution.

What is meant by Subrogation?