Share Capital is the amount raised by a company through the issue of common/preferred shares. It remains with the company till it is liquidated. 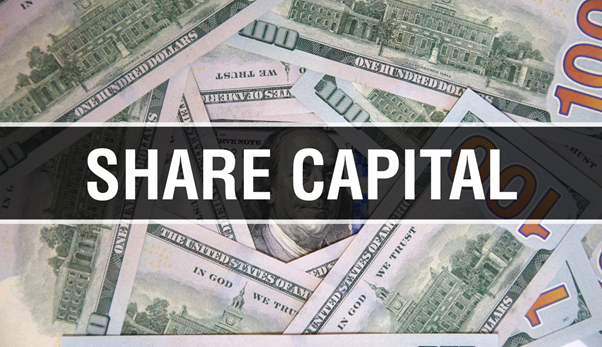 Why do companies issue shares?

A business would allow the general public to purchase its shares to gain fractional ownership. Shareholders are also eligible to collect dividends based on their holdings.

Availability: A Company can easily raise share capital to fund its expansion plans or other business development activities.

Permanent Capital: Raising money via share issue brings the company its permanent capital. It can use the funds during the business’s lifetime without worrying about repayment of the owner’s funds. Also, there is no agreement as such to refund the money of shareholders.

Shareholders will receive their capital after the company is liquidated and all obligations are met.

If a shareholder wishes to recoup his investment, he can sell his stock to others, provided he is allowed to do so under the Companies Act. It would be a permanent investment for the investors who wish to stay invested throughout the company’s lifetime.

No Compulsory Dividend: Another benefit of redeeming stocks is that there is no fixed fee, and the corporation is not obligated to pay dividends. Shareholders have no right to intervene if the management uses its profits for reinvestment.

No Security: The issuing company does not have to mortgage any of its properties to obtain share capital.

Participation: Share capital gives the shareholders the right to be a part of the company’s management through their normal rights as shareholders.

Residual Claims to Income and Property: Once a debtor’s claims are addressed, the shareholders’ claim to income are met. Similarly, creditors have the first claim to the company's assets if it is liquidated. The shareholders would get the remaining amount.

To generate share capital, a Company has various types of equity shares to consider. The different types of share capital are highlighted below: 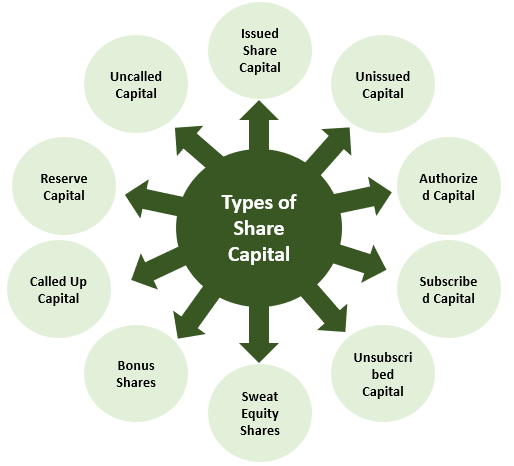 What are the associated risks?

Equity shares have their fair share of drawbacks, which tend to amplify associated risks with equity share capital. Here are the key risks linked with share capital:

A business can sell its equity shares to the general public for purchase. These days, investors have a greater understanding of how the investment market works and which practices will benefit them. They gather detailed data and evaluate an investment opportunity to determine its prospects before deciding to invest.

As there are many options for investors to pick from in the stock exchange, there are chances of raising capital, which is insufficient for the intended purpose.

Companies that sell several shares at a low-face value risk attracting a higher number of investors than expected.

Getting a broad shareholder base is only helpful if the number of shareholders is held within a manageable range. When the amount becomes unmanageable, it increases the company's liability burden by requiring them to pay a larger portion of their profits as a dividend than they had expected.