What is RC or Reverse Circulation Drilling?

RC or Reverse Circulation drilling is widely used drilling method which uses concentric cylindrical drill rods including an outer drill rod and an internal tube. The hollow inner tubing enables a steady and smooth flow of drill chippings to be transferred to be removed. 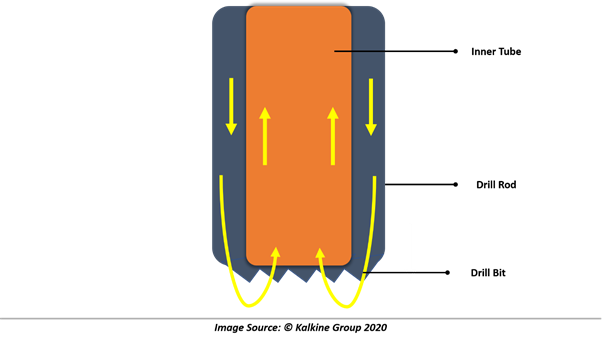 While the selection of the drill depends largely on the time involved, depth of the target, rock formation type, cost associated with the drilling and other factors. RC drilling has gained industry wide acceptance offering major advantages over other frequent drilling techniques such as RAB drilling and Diamond drilling.

RC utilises hammer design and dual wall drill pipe to facilitate removal of samples unpolluted by drilling activity as the sample is flushed out via the inner tube of the drill pipe.

The entire section has been described to answer your major questions of “WHY, When & How” RC drilling?

While this is not an exhaustive information of RC Drilling, we take immense pride in sharing the objective, method and outcomes of the RC drilling campaign.

Why is a RC drilling program preferred? 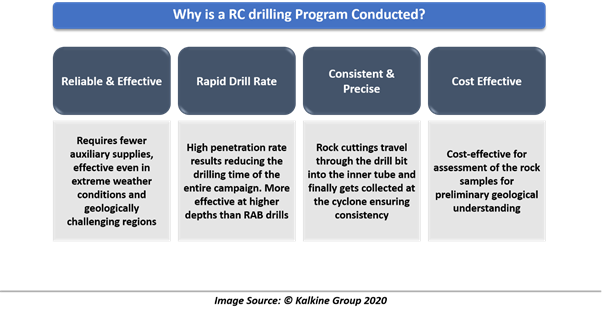 While a RC drilling method is just another way to conduct drilling at the prospective targets, but why is it conducted remains unanswered and is very critical to understand the concept thoroughly.

Consistent and uncontaminated samples: The samples travel through the bit into the inner tube and finally get collected at the cyclone. The close loop system increases the reliability of the drilling program and consequently the interpretation of the mineralisation. This creates a possibility of sampling large volumes of high-quality reliable samples.

The sample cuttings are easy to be tracked and can be used by the surveyors and other stakeholders involved to locate the prospective mineralisation more precisely.

High penetration rate of the drill: RC drilling penetration rate is often comparable to open drilling methods and typically faster at higher depths. The velocity of the sample cuttings could rise to over 250 meters a second ensuring efficient retrieval of the cutting at a rapid rate.

Flexible and Adaptable: Reverse Circulation drilling is simplistic in approach and requires much less water than diamond drilling. The drill method is a cost-effective method in comparison to the diamond drilling.

The Cost effectiveness makes the drill method highly effective for geologically challenging regions and appropriate for small mineral projects. The drill method is an effective method even during extreme weather conditions.

What Precedes a RC drilling Campaign?

The Exploration of a mineral project is an extensive process with each step included that may vary with the region of the project and also, the commodity or mineral desired. While there is no specific way to explore, but still they are some necessary steps which are most frequently followed before proceeding to a drilling program.

Reverse circulation drilling is an important stage in the exploration of any mineral project. The most frequent RC drilling campaign is conducted after completion of a mapping and surveying program to identify highly prospective regions.

Further, the prospective region is divided into a gridline, the size of each grid depends on the quantum of the drilling program. Work site and drill pads are prepared for hosting the drilling rig at the right location to commence drilling.

How is a RC drilling campaign conducted?

RC drilling is actually quite similar to any conventional drilling method where the drill cuttings are returned to the surface through the inner tube inside the drill rods. The Reverse Circulation rigs usually have a large capacity and are equipped to handle large downhole equipment, the penetration is achieved through a pneumatic reciprocating piston or the downhole hammer.

The drill bit is typically 115 to 150 millimetres in diameter and houses protuberant tungsten-carbide buttons which cut the hard rock surfaces when the drill bit rotates at speeds of 30 to 50 rpm.

Prior to the commencement of the deeper drilling, a piping made up of polyvinylchloride or metals is installed at the surface to prevent collapsing of the adjacent soil or rock formations into the hole. The collars are extended to a depth of over 30 meters after assessing the stability of the surface formations. While the collars are not installed in every case, the crucial step is a necessity in case where the rock formations are soft.

The circulation is achieved through pumping the air down into the drill hole between the inner and the outer tubes. The air is further returned up via the inner tube along the rock cuttings to the surface. The rock cuttings are then collected to a cyclone where it is collected and bagged.

While, RC drilling is mostly air powered, water could be injected to reduce dust and for better circulation of the fluid to bring the chip samples to the surface. In such cases chemical agents are added to the water to agglomerate the rock cuttings and increase the sample recovery.

RC drill rigs may require diesel, water and maintenance supplies. Mostly conventionally, a compressor and booster compressor are installed on the drill site.

What succeeds a RC Drilling Campaign?

While drilling is an important affair in minerals exploration, the chemical assaying of the samples is equally relevant. The collected rock chip samples are then delivered to a testing labs. At the laboratory it is tested for physical and chemical characteristics. The collected samples are taken for evaluation to determine the mineral composition.

The testing of the samples results in the chemical composition of the rock formations highlighting the presence of the desired elements and mineralisation. The assay results may further share insights on the chemical state of the element, highlighting the deposit type and the dominating mineral in which the element is present. Geologists can then survey the drilled holes and make an assessment of the overall mineral deposit.

FTX US ventures into stock trading against stablecoins. What does that mean?

Why did Fortescue (ASX:FMG) share price close 3.8% up today?