Based on the classification scheme prepared by the largest member organization of oil and gas professionals worldwide, SPE (Society of Petroleum Engineers); Probable reserves are those unproved reserves that are calculated to be having at least 50 per cent probability of being recovered as per the estimation made using current geological and engineering data.

Broadly, reserves are classified into three main categories by SPE based on the certainty of recovery. The first category of reserves is Possible reserves, next is Proved reserves, and the last one is Probable reserves. These categories are used by various stakeholders to evaluate the total assets of a company which is also known as Fair Market Value. It is also used to forecast and plan. Reserve categorisation and determination of recovery volume from reservoirs is carried with the help of statistical modelling technique. 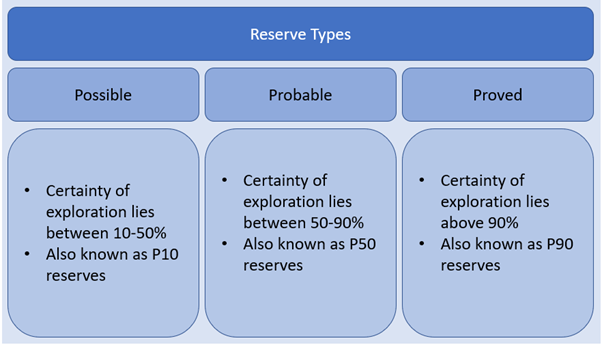 Quantitative measurement of risk associated with various type of reserve categories is required to understand the amount of risk which is involved in the exploration of the reserve. However, in most of the cases, reserve estimation is not based on the mathematical, probabilistic measurement technique; instead, it is calculated based on the deterministic measurement technique. Ideally, the results of both methods should be the same.

What Probable reserve include:

Probable reserves may include:

Reserve estimate of a reservoir is carried out using various geological and engineering methods which are widely accepted in the oil & gas industry. The technique which is used for estimation is also backed up by the previous similar experience of reservoir conditions found at some other place. Original Oil in Place and Gas in place in the reservoir is estimated based on the results obtained by the analysis of results obtained from various techniques. For example, structure maps can be used to find subsurface reservoirs. Isopach maps can be used to know the volume of reserves. Other methods like coring, logging can be used to estimate the porosity, permeability and saturation of the rocks present in the reservoir.

Based on the original reservoir pressure conditions, estimates on recovery factor is determined to OOIP & OGIP. The recovery factor helps to estimate the ultimate recovery volume, commonly known as EUR.

In a producing reservoir whose production rate started declining at a considerable rate, reserves are calculated based on declining curves or performance characteristics. For such specific cases where the reservoir is in producing stage, the estimates are based on the economic feasibility or the level of commercial production of reserves up to which a company can sustain.

The volume of gas estimates is expressed as Sales gas which is a raw natural gas in which further procession & fractionation is required. Typically, it is expressed at a temperature of 60 degrees Fahrenheit (°F) and a pressure base of 14.73 pounds per square inch absolute (psia). Sales gas is the amount of gas which is left out after flaring, shrinkage, fuel usage and field separation.