What is meant by power of attorney?

Power of attorney is a legal document that allows an individual to appoint someone to manage their property, finances, and medical affairs. This is usually done for those individuals that become unable to take care of their financial matters alone or are incapable of doing so. 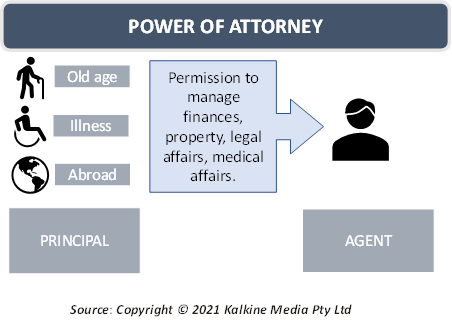 Power of attorneys can be easily created. However, it should be ensured that the process is done in the presence of a knowledgeable attorney. POA agreements are becoming increasingly popular as people often find it difficult to manage their finances on their own in the fast-paced world.

Who needs a power of attorney?

Power of attorneys are created by individuals who are often unable to take care of their financial affairs. This can happen due to various reasons which do not allow the individual to be physically present to handle these matters.

Some of the common reasons why individuals would be unable to manage their finances and assets include: being abroad for some work or family related event, old age, health problems, being bedridden and other reasons that make the principal absent from the place of the transaction.

What is the role of an agent?

The principal’s agreement determines the role of the agent and how much power is granted to him. Such an agreement can take place immediately, as soon as it is proven that the principal is unable to manage the financial affairs.

There are multiple decisions that the power of attorney must take. These include not just financial decisions but also making gifts of money, making healthcare decisions, and recommending a guardian.

The relationship of the agent with the donor is that of a fiduciary. This means that the agent must always act in the best interest of the donor, even when the agent is not there to overlook. The agent must keep the principal’s property separate from his own and must maintain proper records.

In case of violation of any of the agreements, the agent would be subjected to liability for his actions. After the death of the principal, the agent must hand over the deceased’s property to the appropriate representative.

Sometimes, donors may grant the power of attorney to someone in the family. In such cases, the authority given to the family members is crucial and must protect the principal’s wealth. (SOURCE:)

What different types of power of attorney are there?

There are 4 types of power of attorney, depending on their purpose. These are:

This is an effective tool if the principal is a frequent flier to foreign countries or is incapacitated in some way.

For such an agreement, the doctor must first sign a certificate stating that the principal has become mentally incompetent and needs assistance. The doctor can be decided by the principal himself. A springing durable POA allows the principle to grant access to the agent only when a specified event occurs.

What aspects should be considered before a power of attorney is chosen?

Often individuals would assign their family members as POAs because a sense of trust is associated with them. Handing over financial matters to a foreign agent may not always be the easiest task. However, thorough investigation should be done and only those agencies that have a reputable name should be considered.

Many people assign their children as their power of attorney. However, it should be ensured that the children possess enough ability and knowledge to conduct financial operations successfully on behalf of the principal. In case children are not capable enough to be appointed as POA, the principal must make an outsider for the role.

Additionally, principals may choose more than one agent to take care of multiple matters. This can be done with multiple family members as well, in case one family member cannot take all financial decisions alone.

Is Lithium Really The Planet’s Saviour?