Petrochemicals are the synthetic compounds which are derived directly or indirectly from the hydrocarbons present in crude oil & natural gas. Petroleum is a complex mixture which is found entrained in subsurface rocks by the decomposition of fossils. It may contain one or more carbon atoms into which hydrogen atoms are attached. This journey of transformation from raw crude or gas to the user centric petrochemical product involves various complex steps. As per EIA in 2019, the US has used around 27 % of its total petroleum consumption, as petroleum product.

The global petrochemical market was predicted to be USD 476.2 billion in 2020 and is expected to reach USD 651.1 billion by 2027 showing a compound annual growth rate of 5%. Asia pacific has dominated the market with having around half of whole world’s market share. The demand for petroleum products is rising due to rise in demand from end use industries and capacity addition in base chemical industry. BASF SE, British Petroleum Plc, Chevron Corporation, China National Petroleum Corporation (CNPC), China Petrochemical Corporation (SINOPEC) are some of the key players operating in the Petrochemical industry.

Due to the COVID-19 pandemic the imposition of lockdown and travel restriction all over the world has hampered the petrochemical industry too. The demand and supply both have declined due to less consumption in end use industries and limited demand from the travel sector.

After the extraction of crude oil and natural gas from the subsurface, which comes under upstream process, the raw material is transported to the refineries where it is refined and converted into various usable forms. Various fractions of distillates are obtained which include diesel, heating oil, waxes, feedstocks, lubricating oil, asphalt etc.

As per EIA, a fourty-two-gallon U.S. barrel of crude oil yields around fourty-five gallons of petroleum products as a result of work process gain that is caused due to the refining process. The volume increases because the density of some final petroleum products gets decrease during the due to various types of chemical treatments.

The raw material used for the manufacturing of Petrochemical product is called feedstock. There are two main types of feedstocks used commonly namely, Natural Gas & Naptha.

Natural gas is obtained as an associated product during the exploration of crude oil where as naptha is found as a refined product during the fractional distillation of petroleum. The choice of choosing either naptha or natural gas as a raw material is based on its availability and technology used in the manufacturing of petrochemical. Natural gas & Naptha are used as a main source of raw material for conversion into petrochemicals because it is readily available, economic, and can be processed most easily into the primary petrochemicals and finally into other end user products.

Classification of Petrochemicals based on number of Carbon atoms:

Broadly, petrochemicals are classified into three main types which are Light, Medium and Heavy based on the number of carbon atoms present.

Heavy Petrochemicals: Petrochemicals containing around 15-18 Carbon atoms are put under this category. They have a boiling point ranging from 570 to 750 degrees Fahrenheit. Examples are diesel, lubricating oil, heating oil etc.

Light Petrochemicals: These are the lightest one among all and contains less than 6 carbon atoms. The boiling point range for light petrochemicals range between 80-190 degrees Fahrenheit. Examples are methane, ethane, ethylene which remains in gaseous phase at room temperature. 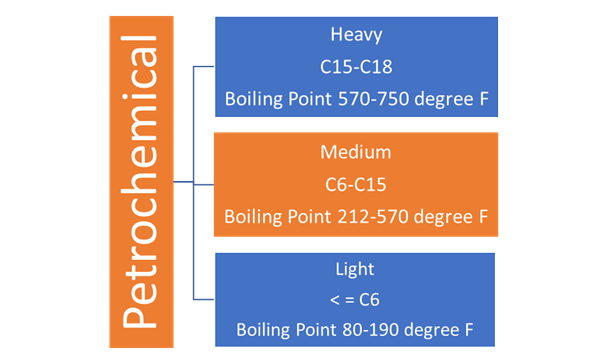 Classification of Petrochemicals based on their Generation:

Broadly, petrochemicals can be classified into three main types that are Primary, Intermediate and Down-Stream petroleum products based on the stage of generation of the product.

Primary petrochemicals are directly obtained from the feed stock. They are also used in the manufacturing of intermediate petrochemicals. The primary petrochemicals obtained in the process are based on the type of feedstock used. Primary products include olefins, aromatics and methanol. Olefins are unsaturated molecules of carbon and hydrogen that are made up of small hydrocarbon chains containing two, three or four carbons in length whereas, aromatic compounds contain a minimum of six-carbon forming a ring like structure. The OH group in methanol denotes that it is an alcohol.

There are various methods used for the conversion of first stage to second stage but amongst them polymerisation is the most important step which is used in the manufacturing of fibers, synthetic rubbers and plastics which is extensively used in everyday life worldwide. Other very important conversion processes may be the production of PVC, paper, paint and polyester.

The petrochemicals that are derived from a given feedstock by a progression of reactions are called downstream petrochemicals. Downstream implies that a specific petrochemical comes at a later stage in the system of chemical reactions. For example, Methyl Alcohol.

What is municipal solid waste & how does Canada manage it?

DEC, BP: Stocks to look at as Brent crude price surges above $100

Asos, Shell, Power Metal, EasyJet: Why these stocks are in news

Shell may lose $5 bn after quitting Russian ops. Should you hold the stock?

Why did Imperial Petroleum (IMPP) stock surge over 344% in a month?

Oil touches $120 a barrel: Should you invest in these stocks?

Rising energy bills: 5 stocks you want to put on your watchlist