Formerly known as MATIC. Polygon provides interchain scalability solutions, that is, an extended infrastructure for the construction of blockchain networks that can communicate with each other. The aim of the polygon is to bring scalability and adaptability in all the blockchains that are operated on Ethereum.

The India-based cryptocurrency Polygon is planning two new features to its platform. One feature will add speed to the transactions and the other will be responsible for the distribution of loads of off-chain exchanges.

Polygon claims to have solved some of the major issues associated with the blockchain such as slow speed, high gas fee, and security issues. The upsides of the polygon are, it is more secure, more powerful, more open and takes full benefit of Ethereum’s network effect.

The mission of the polygon is to provide tools and core components which will enable people to join the borderless society and economy.

What is the working of polygon?

The functioning of the polygon is like the functioning of any other proof-of-stake-based blockchain. It is similar in terms of validator nodes, local dapps, client nodes, tokens, structure and so on. The only function which differentiates polygon from any other blockchain network is that exchanges are settled and clustered over the mainchain of Ethereum.

Polygon has utilised a layer-2 network for developing a blockchain network that is Ethereum viable and interoperable. The layer-2 network helps in increasing the throughput and the security characteristics and the original decentralisation remains unaffected, that is the core component of blockchain. Through Layer 2, scalability is achieved within the network.

There is a modular system in the polygon which is used for assembling the custom networks, empowers the developers to reset the blockchain networks in no time. Moreover, on polygon network, it is easy for a blockchain to cooperate with a different blockchains and no extra efforts are required for establishing the coordination. 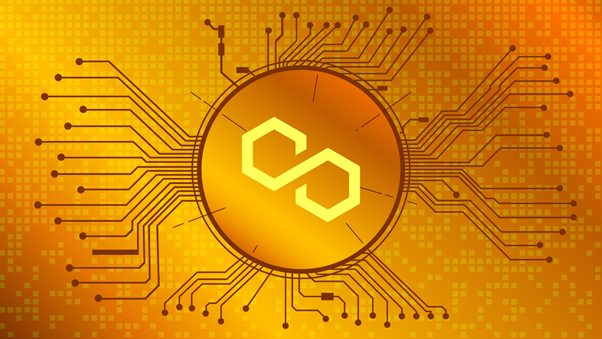 What is the Polygon token?

The tokens of the polygon are known by the term MATIC. These tokens are the base resource on the polygon network. The function of MATIC is not limited to performing transactions or entering any exchange but it is also crucial for protecting the polygon network by storing tokens. MATIC has been rebranded as Polygon MATIC and it led to the tremendous surge in the prices of MATIC and ultimately increased the usage of MATIC in the crypto world.

The covered stockpile of polygon MATIC is 10 billion tokens and the current supply of 5 billion is circling.

MATIC tokens are available on the majority of the well-known decentralised as well as centralised trading platforms like Coinbase Pro, 1inch Exchange and Binance.

The major focus of the polygon creators and contributors is to simplify the process for accessing the polygon tokens and making it compatible with both cryptocurrency and fiat money.

The reports of CoinGecko revealed that, when polygon MATIC was at the development stage, the market capitalisation was around 1.8 billion dollars.

What are the best features offered by a polygon?

Following are the features which make polygon attractive for investors and developers:

The technology of polygon enhances the blockchain performance.

Sidechain is one of the products that is offered by the polygon. Sidechains establish connections with blockchain technology and enhance its overall performance. It allows transactions to be conducted in lesser time along with lower cost. Earlier, the polygon was developed to cooperate with the Ethereum blockchain but presently polygon is capable of establishing an interface with all types of blockchains.

The aim is to provide an interconnected structure for a range of blockchains.

With the framework of the polygon, the blockchain will be interconnected rather than working in isolation. This framework will provide the benefits of standalone blockchains and Ethereum (tools and security).

EVM is software that is provided by Ethereum through which developers can create their decentralised app. Due to EVM, Ethereum gained popularity and polygon is compatible with EVM. SushiSwap and Aave are some of the apps which have been deployed on the polygon.

Polygon MATIC can be used in several areas, such as:

Gas fee – The transaction fee on the polygon network can be paid with MATIC coins.

Staking – Staking stands for lending the coins and in exchange receiving interest. On the polygon network, the tokens can be lent to the network to earn returns in exchange for it. The interest rate on the tokens keeps on changing on daily basis.

Ease of accessibility-Some of the cryptocurrencies are difficult to access but that is not the case with Polygon as it is listed on high-rated crypto exchanges such as Coinbase, Gemini, eToro and Binance.

What are the downsides of the polygon?

Competitive blockchain networks are not the only roadblocks. Ethereum 2.0 is also a roadblock. New upgrades are introduced by Ethereum and one of the main goals of Ethereum is to make it scalable. If Ethereum can achieve this milestone, then all the features which make Polygon different can become worthless.

What you should know about Bubbleworld NFT and Founders Pass