Net Present Value (or NPV) is defined as the sum of the present value of all future cash flows (negative or positive) discounted at a required rate of return of a project.

NPV is one of the most important tools used in capital budgeting and investment decisions and assists in analysing the profitability of a projected investment or series of cash inflows from a project.

To understand the concept of NPV, one has to keep one thing in mind that the money has a time value, i.e., a $100 received today is more in value as compared to a $100 received a year later.

What would you choose?

Well, the answer to that lies in the time value of money and the opportunity cost.

An opportunity cost is what a resource is worth in its next best use or could also be defined as a return forgone for choosing an alternative.

Coming back to over example, suppose if the current return on saving accounts is 10 per cent per annum (10% p.a.). The ideal choice would be to accept a $100 bill today, as you can invest that $100 in your saving accounts, which would generate an extra $10 for you in a year.

However, if a person chose to take $105 a year later than $100 today, the opportunity to earn 10 per cent is forgone, which would become the opportunity cost in this scenario.

Money has a time value in that individuals value a given amount of money more highly the earlier it is received due to that fact that a smaller amount received today may be equivalent in value to a larger amount received at a future date.

The time value of money as a concept primarily deals with equivalence relationships between different cash flows across different horizon of time.

Once we are familiar with the time value of money and could comfortably discount cash flows, it becomes very easy to calculate the NPV of a series of projected cash flows.

Analysts use several important criteria to evaluate capital investments, in which NPV is the most comprehensive measure to determine whether a project is profitable or not.

To illustrate the NPV calculation and investment decision, we would work our way through an example;

Assume a Company A is considering an investment of $50 million in a capital project/ capital good  that will return after-tax cash flow of $16 million a year for the next four year along with an additional $20 million at the end of the fifth year, i.e., year 5.

Furthermore, suppose the required rate of return on the project is 10 per cent.

The NPV for the above case would be as below:

The investment of $50 million has a total value, or present value of future cash flows, of $63.136 million.

The investment decision criteria around NPV is relatively simple, i.e.,

In other words, a  positive NPV investment is wealth-increasing in nature and vice versa.

NPV profile is a related concept to NPV that shows a project’s NPV graphed as a function of various discount rates.

The NPV profile for the above Company A example is as below: 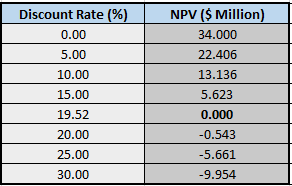 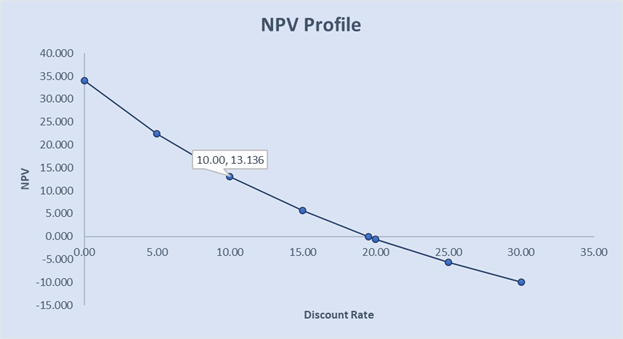 The NPV profile of the above example is relatively simple, where the NPV declines at a decreasing rate as the discount rate increases. The profile looks convex from the origin (or convex from below).

Ranking Conflicts Between NPV and IRR

However, in the case of two mutually exclusive projects, the most widely used investment decision criteria, i.e., NPV and IRR would sometimes differ.

This happens as differing cash flow patterns can cause two projects to rank differently with the NPV and IRR.

So, whenever, the NPV and IRR rank two mutually exclusive projects (i.e., either Project A or Project B) differently, the investment decision making suggests giving NPV a higher preference, i.e., in such a case the decision-maker should choose the Project A over the Project B.

Some Drawbacks of Net Present Value 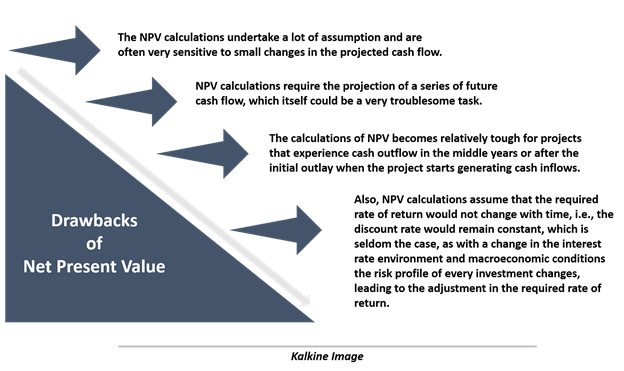