What are capital goods?

Capital goods include items like heavy machinery, equipment, vehicles, plant, computers, building. As a tangible asset for the firm, they are capital intensive products having many components. 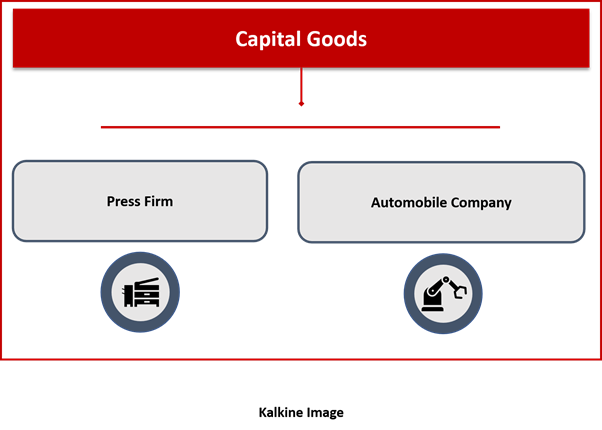 Final goods are produced with the utilisation of capital goods. A printing press for a press firm is a capital good used to print newspapers, which is a source of revenue. Similarly, robots used in assembling automobiles are also capital goods for automobile companies.

Firms require investments to acquire capital goods. In accounting terms, the investment in capital goods with useful life over one year is a capital expense. Despite an expense for the firm, it is recorded under assets of the firm on the balance sheet and is expensed on the income statement over its useful life.

Capital expenditure levels of a nation also reflect the ability and intention of producers to increase the capacity of production, and its influence on the gross domestic product of a country.

What is the importance of capital goods in an economy?

Capital goods are an essential consideration in an economy and also reflect the outcomes of research and development undertaken in the economy. As a crucial factor of production, countries seek to develop and commercialise capital goods according to the growing needs.

Increased intensity of research and development enables the country to develop sophisticated and futuristic capital goods, which also exhibit the latest technological advancements and enhancements from the previous models.

Capital goods are crucial to improving the long-term productivity and capacity of a nation. Investments in capital goods industry and goods create manufacturing jobs in an economy. They are crucial to producing finished goods and have an important role in the economy.

Therefore, education and skill development are also precursor to improve the productivity of capital goods, which are crucial for economic development and manufacturing independence of a country.

Consumer goods are used by households and are a type of finished goods, which are produced with the help of capital goods. Consumer goods can be durable goods such as refrigerator, television, washing machine etc.

They are not used to make capital goods after the purchase, unlike capital goods that are used as a factor of production across many industries. But there could be differences in terms of utilisation as well.

Oranges consumed by a household are consumer goods. However, when they are used by a company to produce orange juice as a finished good, orange will be a capital good for the company producing orange juice.

Some of the well-known capital goods companies

Boeing is a US-based company engaged in design and manufacturing of aircraft, rockets, satellites, defence, space and security systems. It also provides services and aftermarket support to its customers and is famous for its aeroplanes.

Siemens AG is a German company and is one of the largest manufacturing companies in Europe with a worldwide footprint. It emphasises of automation, electrification and automation. Siemens is a large developer of resource-saving and energy-efficient technologies.

It is also a leading supplier of equipment for power generation and transmission, medical diagnostics. Siemens contributes to industrial and infrastructure solutions for a range of industries.

Caterpillar is a US-based company established in 1925. It is a leading manufacturer of diesel and natural gas engines, mining equipment, construction equipment, diesel-engine locomotives, industrial gas turbines. It also provides financial and related services to consumers.

Caterpillar provides services throughout the product life cycle and develops new technologies with decades of the domain expertise. It has a global presence in the industries served.

Cummins Inc. is an industrial goods manufacturer based in the USA. It is engaged in the design and manufacturing of diesel and natural gas engines, high-speed horsepower engines, power generation equipment, alternative-fuel electric generators.

Cummins is also involved in turbo technologies, filtration, emission solutions etc. It sells in over 190 countries and has a global footprint.

Daikin is a Japanese multination company. It is a leading manufacturer of air conditioner and equipment. It also operates chemicals, filter, oil hydraulics, defence systems, and electronic businesses.

ARG, IPL- Have these 2 stocks declared dividends in FY22 results?