What is meant by Lien?

Lien is legal claim over the assets that are kept as collateral against a loan or debt. A lien is used to protect the underlying obligation which, as an example, can be the repayment of the loan. A legal claim such as a lien allows the lender to seize the asset in question if the borrower fails to make the repayment.

The lender who holds the lien claims is called the lienholder.

How does a lien work?

In those cases when a borrower fails to pay his mortgage or is not able to repay the loan, a lien can be placed on the underlying property kept as collateral. This is done so that the lender can obtain the amount owed to him.

A line may not only be associated with a loan repayment. A lien can also be applicable when one party is unable to pay fees related to a service, child support, contractor’s bills, rent or a court judgement. Any transaction in which the consumer is unable to pay for the service or good availed by him can lead to the service provider turning towards a lien.

Mutual liens can also be signed between the two parties. This happens when the borrower is unable to make the payment, so he/he offers to sell off the underlying asset in exchange for the services received. When a lien is listed with the concerned authority, it shows that the lender has an interest in the underlying asset before it can be sold off elsewhere.

Once the lienholder gains access to the underlying asset, he/she may resell it for profit.

What is an example of a lien?

Consider a legal case wherein an attorney has been hired to carry out the necessary paperwork. Suppose the case is ongoing, however, the concerned person has failed to make the payment to the attorney for his services.

In such a case, the attorney can file for a lien and seize the paperwork. This would enable the lienholder to not go into a loss. Consequently, the customer would be forced to pay up for the services of the attorney. Thus, the lien would be dropped once the fees is paid.

What types of lien are there?

Lien may be of different types based on who puts a lien for instance financial institutions, governments, and small businesses. The following types of liens are there:

How can a lien be removed?

There are methods other than full repayment that can be availed by the borrower. These include the following: 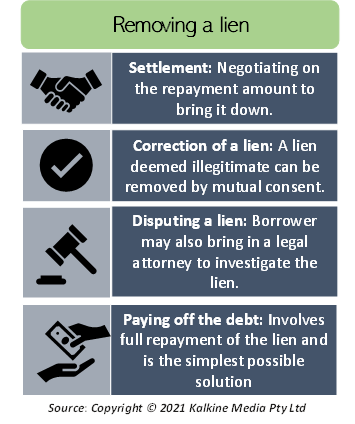 Canadians Are Googling About High-Interest Car Title Loans Amid Pandemic

What is margin funding?

What’s Hot Across Sectors on ASX?