Internal rate of return (or IRR) is defined as the discount rate that makes the present value of the future after-tax cash flows equal to investment outlay, made initially, by assuming that profit generated from an investment could be reinvested at the same discount rate.

In simple terms, IRR could also be defined as the discount rate, which makes the Net Present Value (or NPV) of an investment zero.

Apart from capital budgeting, IRR serves as a standard measure of performance in the private equity and private real estate markets in which regular valuations of assets, i.e., daily market prices, are not available.

IRR accounts for both the timing and magnitude of cash flows into and out of an investment or a project.

In the above equation, the internal rate of return or the discount rate, equates the present value of the future cash inflows to the initial investment.

The same equation could be rearranged as below:

The second equation of the IRR calculation points toward the other definition of IRR, i.e., a discount rate which makes the NPV of an investment zero.

Suppose a Company is considering an investment of $50 million in a capital project that will return after-tax cash flow of $16 million a year for the next four years along with an additional $20 million during Year 5.

The IRR calculation for the above example is as below:

However, financial analysts generally use various financial calculators such as TA II Plus Professional, Hewlett Packard 12C for calculating the same.

Some analysts also use the IRR feature present in various spreadsheets such as Microsoft Excel.

NPV Profile to calculate the IRR

Suppose a company invests $2.2 million in a project, with an expected cash flow as below

To calculate the IRR of the above problem, we could either utilise the above formula and go for the trail and error method, that would equate the present value of the year-end cash inflows in the above example to the initial outlay of $2.2 million.

Or else, we can build an NPV profile for finding out the same by using Microsoft Excel as below:

For building a NPV profile, the first thing we need is a discount rate or the expected rate of return of an investors. For calculation purpose, assume that the current required rate of return is 8 per cent.

The NPV profile for the above problem is as below 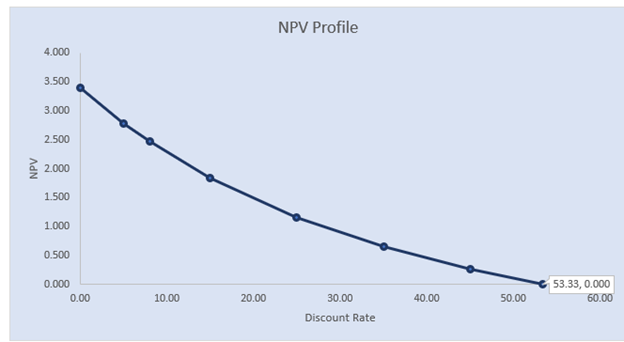 While constructing the NPV profile in Microsoft Excel, one can use various discount rates to reach a zero NPV, use the IRR function to determine the internal rate of return of a series of cash inflows, and can use Goal Seek tool under the what if analysis in the Data tab. 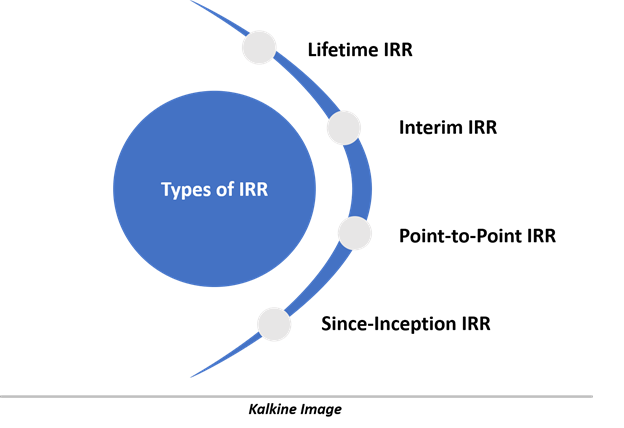 Lifetime IRR is defined as the IRR of all the cash flows that are available from start to finish of the investment. In this type of IRR, there is no terminal appraised value or residual value. Sometimes the lifetime IRR is also called as the “overall” IRR.

Interim IRR is defied as the IRR that assumes an appraised terminal value, i.e., in an interim IRR, period T occurs prior to the end of the investment and an appraised value is used for the period T cash flow.

PTP IRR is defined as the IRR of the time 0 and time T cash flows that are appraised values or are other cash flows during the investment’s lifetime.

The investment criteria with the IRR is relatively simple, i.e., invest if the internal rate of return is higher than the required rate of return.

IRR plainly assumes that the cash flow generated after the initial outlay could be reinvested at the similar discount rate over and over again till the end of the project’s life or investment tenure. However, in reality, that is seldom the case and with the low interest rate environment, every investment faces the reinvestment risk.