What is meant by doughnut economics?

Doughnut economics is an economic model newly formed to better fit the 21st century. The model incorporates humanity into a doughnut-shaped economic model. The model takes a holistic approach and provides visual simplicity, making it a perfect space to bring new conversations.

The doughnut model could be the next new thing for businesses and governments as it depicts the state of humanity in a single image.

What is the doughnut made up of?

The goal of the doughnut is to meet the needs of all people that are on the planet. The model derives its name from a doughnut, a ring with a hollow space inside it. The model has two rings: 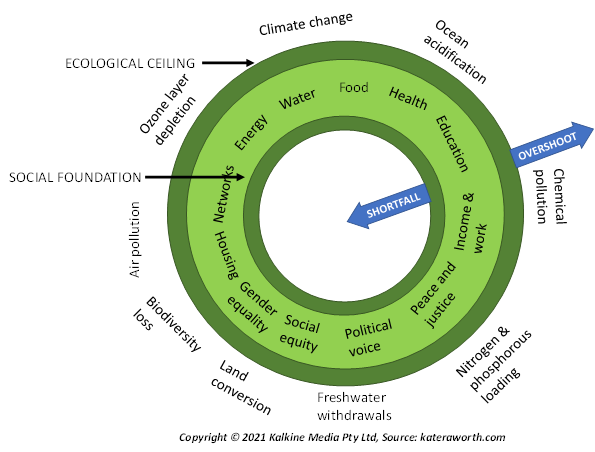 These two boundaries lie around a doughnut-shaped space. The space represents an ecologically safe and socially just area wherein humanity can thrive.

The hole in the middle represents the proportion of people who are falling short on life’s essentials like food, water, healthcare, freedom of expression. The main challenge faced by governments and organizations worldwide is that of bringing everyone out of that hole.

The main point to note here is that everyone, when moved out of that hole, should not overshoot the doughnut boundary. The model not only considers the efficient use of existing resources but also promotes sustainable living.

Why was there a need for the doughnut model?

Economics has always taught the allocation of scarce resources through an efficient method. However, as time progressed, the problem of scarcity has found solutions through various alternatives.

With available alternatives, the study of economics has shifted to finding solutions to the problems caused by these alternatives. Sustainable living is one such solution. However, finding the means to achieve the same is still deemed an arduous task.

Society needs to move towards a system centred on maximizing growth to overcome scarcity and creating a community utilizing resources sustainably. Thus, the focus has been shifted from achieving growth to moving towards more ecologically friendly production methods.

What are the seven principles of doughnut economics?

The theory focuses on seven ways to rethink economics fundamentally and alter the economy into one that is everyone:

The sustainable development goals provide a good blueprint for the transition to a healthier planet and more fair means of living. These goals are represented through the inner and outer dimensions of the doughnut.

The responsibility should be equally divided amongst the different aspects of the economy, and neither should be given priority over the other. Instead, equal support should be given to all to serve human welfare in complementing ways.

This model suggests that a new representative is required to better fit economic models around. The rational consumer is too aware and too smart to represent an average human being that possesses the capacity to be empathetic and kind to others.

Humans may not always act in their selfish interests and may not be ego-driven while making all decisions faced by them. Thus, attributes associated with a consumer need to shift from money-hungry beings to more humanistic beings.

The only way to bring in the world’s complexities into an economic model is to move toward system thinking. A systematic thinking approach can provide a better understanding of how the world works.

The solution to this is not just redistribution but also addressing the inequality caused by wealth concentration because of returns on capital.

Focus, instead, should be on moving towards a circular flow wherein resources are reduced, renewed, and reused.

WDT, SPY, RAK, IKE, SCT: How are these 5 tech stocks performing on NZX?