Cryptojacking is a malicious activity where cybercriminals hack into personal computers and business computers by installing a software. Cryptojacking is also known as Illicit cryptocurrency mining. The software code is easy to deploy and runs in the background of computer systems, making it difficult to detect. The software drains the computer battery at a faster rate, causes delays in computer response time, high electricity bills, overheating of the device, and increased processor usage.

With a few lines of code, the hacker can get access to the victim’s cryptocurrency wallet and use the resources for cryptocurrency mining (crypto mining). The cybercriminals drain the earned currency or steal it by transferring them to their wallets through the seized computers.

If the cryptocurrency wallet is compromised, the owner will not be able to recover the amount. Whereas, in the case of bank accounts, the stolen amount is transferred back by the bank. 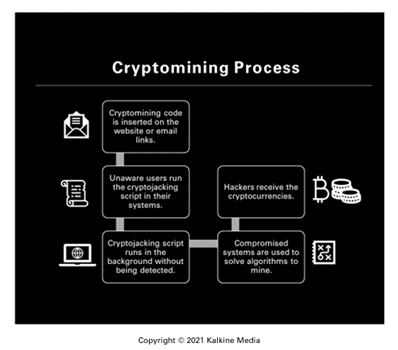 How do cryptojackers spread cryptojacking scripts?

Cryptojackers can use any of these methods to perform crypto mining maliciously:

Cryptojacking can also occur through third-party attacks or supply-chain attacks. For instance, the hacker can install the mining scripts along with the relevant banking information to have all the proceeds saved in their wallets. This primarily happens when the website is poorly secured.

The preventive measures essential to protect the computer systems, servers, and crypto assets that could be compromised by cryptojacking are:

Digital wallets (also known as cryptocurrency wallets) are the wallet holder's financial account used to store funds, make transactions, and maintain transaction history. Cold wallets store cryptocurrency on the offline platform and protect the wallet from cryptojacking or any other vulnerabilities. A cold wallet is considered safer because it is not connected to the internet, making it susceptible.

The first cryptojacking case showed up in September 2017 at Coinhive. With the launch of Coinhive, there was a rise in browser-based cybercrime rather than file-based cryptojacking. With the help of its ready-made scripts, cryptojacking was made more accessible as it did not require downloading a file into the victim's system.

The organization published a mining code for owners to earn a passive income on their websites. Hackers realized that this code could mine their currency using a website’s visitors' resources. This code used the visitor’s computer to mine, and this continued for as long as the web page was open. Coinhive was shut in 2019.

In 2018, Apple came up with restrictions on crypto mining to diminish the increasing threats to iOS. To prevent cryptojacking on mobile devices, a strong mobile device management solution is required.

Crypto mining 101: Everything you need to know