Share buyback or share repurchases have grown popular as companies have invested massive funds in buying back shares. It has found criticism from the socialistic descendants of the society, arguing increase in income equality.

Investments in buybacks is dubbed as a return to shareholders, while it is also understood that buybacks have contributed to lack of investments in factors of production, especially developing human capital.

In the first half of 2020, Berkshire Hathaway purchased $6.7 billion worth of Berkshire shares with around $5.1 billion invested in buyback in the second quarter ended June 2020. It can be said that Warren Buffet invested in Berkshire.

What is stock buyback?

Stock buyback refers to purchasing own stock/share by the enterprise and effectively cancel the number of shares brought, thereby reducing capital in the balance sheet of the business. Companies with plenty of cash sitting idle engage in share repurchases in their capital management plays.

The top brass of corporations have applied this alternative return to shareholders extensively, but most of time these companies include high cash generative businesses. Stock buybacks reduce share outstanding of the firm, while dividends reduce share price on the ex-date.

Sometimes Board and investors are inclined to buybacks in some jurisdiction due to the taxation structure. But some countries also impose taxes on buyback of securities. In the US, share buybacks are seen as an alternative because of taxes on dividends.

In India, there is a share buyback tax, which is paid by the listed companies upon buying listed shares. In Australia & New Zealand, firms may provide tax credits provided to shareholders along with the dividends.

There is growing voice against share buybacks across many countries.

How are buybacks conducted? 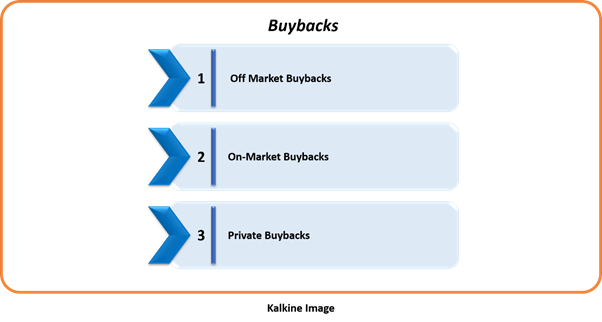 Off market buybacks: Under this offer, the firm may come up with a price or decide price through a bookbuild during the offer period. It would also specify the amount of funds to be invested in buyback or number of shares to be purchased.

The offer will be open for a period of time and shareholders elect to choose the buyback option at the given price. However, the firm may reserve the right to scale back the offer when it exceeds the specified limit.

On-market buybacks: In this case, shares are purchased by a company in the market at prevailing prices. Firms notify about the buyback plans and the funds allocated to conduct the buyback.

Firms buy shares at their own discretion, and this type of buyback activity usually continues for a longer period of time. The scale of buyback is usually less under the on market buybacks and provides the right to invest at various price levels.

Private buybacks: Under private buybacks, firms may enter into agreement with parties or large shareholders to conduct buyback of the shares. The price of the purchase is negotiated between the parties. 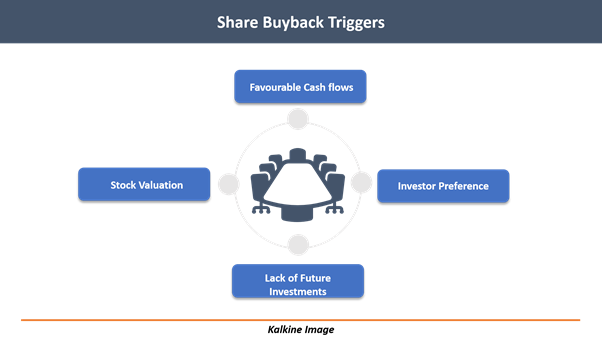 Cash flows: Firms are able to return to shareholders, because sufficient cash was generated during the period. It is important to have sustainable cash flow generation, and excess cash flows generated by the firm sets the path for either dividends or buybacks.

In the event of temporary increase in excess cash flows, it is likely that the company would pay a special dividend, conduct buyback of shares or both. When cash flows are stable and probable, a firm will likely go with dividend.

Investor preference: It has been observed that investors have lobbied for conducting buybacks, especially when cash is sitting idle on the balance sheet. There could be many reasons such as low valuations, no investment opportunities, project opportunities, taxation structures.

Future investments: Raising dividends is mostly welcomed by market participants but there can be times when dividend would need to be reduced, especially in cases of a large investment cycle. When future investments are predictable, the management has better clarity to undertake capital management decisions.

If the business environment is uncertain and the scope of investment is narrow, firms adopt share buybacks while maintaining steady dividends since rising dividends also raise the market expectation of better dividend next time.

Stock price: Management may also feel the stock is undervalued at the given prices and may conduct buyback as a part of its capital management decision. However, they should have enough balance sheet strength to fund other needs of business before conducting share buybacks.

When firms are buying shares at prices below the fair value of the stock, it would benefit the shareholders of the firms. It would also exhibit a perception towards markets that shares are undervalued.

Although buybacks are largely preferred by investors, there are many disadvantages associated with share buybacks. While management believes that shares are undervalued, it could be the case that shares are not undervalued and firms may end up buying shares at elevated prices.

As companies undertakes a share buyback, it lowers the ability of firms to pay dividends to the shareholders. If the capital were not invested in buying shares, it could have been returned to all shareholders of the company.

It also raises questions that firm is not finding opportunities to grow business, therefore the need of investment is lower, forcing the firm to conduct share buybacks. Shareholders have to sell their shares to receive the cash flow benefit stemming out of a buyback, this is a hassle for those who buy shares for income stream.

Seven NZX mid-caps to watch out for in September 2022

Stocks on investors' radar as Brits default on bill payments