What is Accelerated Approval?

Accelerated approval is an approval pathway regulated by the Food and Drug Administration (FDA) that allows an early approval of treatment or drugs that are used in the treatment of severe or life-threatening indications and fulfill an unmet medical need.

Accelerated approvals by the FDA depend on the assessment of surrogate endpoints as a clinical benefit measure to the patients. Therapies or treatments meeting the standards for traditional approval are not applicable for getting an accelerated approval.

FDA grants accelerated approval in situations when an indication course is prolonged and clinical benefit measurement would require substantial time. For example, therapies used for treating specific tumors or HIV, where an impact on the growth of a tumor or viral load can be identified promptly, but the effect on survival is long-term because of the typical course of the disease.

There is one more scenario in which accelerated approval is applied, that is for acute disorders. For which an extensive study would be required to demonstrate clinical benefit because the occurrence is rare, although a surrogate endpoint can be utilized in much lesser duration. Hence, this leads to a faster study.

Accelerated approval is a part of the drug development process, making a drug available as soon as possible. The other three approaches are- priority review, breakthrough therapy designation and fast track designation.

Which treatments qualify for accelerate approval?

There are some risks associated with the accelerated approval process. These risks explain why the approval is restricted to the treatments showing an effect on an endpoint that is expected to predict clinical advantage and that meet the below-mentioned requirements-

For drugs that have granted accelerated approval, post-marketing confirmatory trials have been necessary for verifying and describing the expected effect on irreversible morbidity or mortality (IMM) or other clinical advantages.

Potentially, accelerated approval is also useful in acute indications where the intended clinical benefit can be shown only in a large scale study because the clinical outcome that would need to be assessed for demonstrating clinical benefit occurs rarely.

For instance, accelerated approval could be for the treatment of an acute disorder where an effect related to the surrogate endpoint can be demonstrated in a few patients. However, a large scale analysis would be required to indicate the impact on clinical findings, like survival.

Moreover, this decision is a judgement call based on the biological plausibility as well as clinical data indicating that relationship.

Additionally, the company that is applying for an accelerated approval should meet the subsequent requirements-

A company preparing for obtaining accelerated approval should begin conversations with the review department of the FDA during the process of development and offer information that supports the use of the selected surrogate endpoint along with the intended confirmatory experiments.

What are the endpoints for Accelerated Approval?

According to the FDA, the two categories of endpoints are applicable as a basis for accelerated approval are-

A clinical endpoint precisely measures the therapeutic effect of a treatment, an effect on in what way a patient feels, functions, or survives.

What are the Benchmarks for a drug to get Accelerated Approval?

According to the FDA, drugs or treatments granted accelerated approval should fulfill similar statutory standards for safety as well as effectiveness as for granted traditional approval.

For effectiveness, the standard is significant proof based on satisfactory as well as properly-controlled clinical examinations.

For safety, the standard is getting adequate information for the determination of the safety of the drug for use under prescribed conditions, suggested or recommended in the proposed labeling. In accelerated approval, the Food and Drug Administration can depend on particular evidence, like the effect of a treatment or drug on a surrogate endpoint, as a basis for granting the approval.

Moreover, the application for accelerated approval should also comprise supporting documents for an intermediate clinical endpoint or a proposed surrogate endpoint that it is relatively likely to foresee the intended clinical advantage of treatment.

There are some risks associated with the accelerated approval; the main risks include the following-

When can the withdrawal of accelerated approval take place? 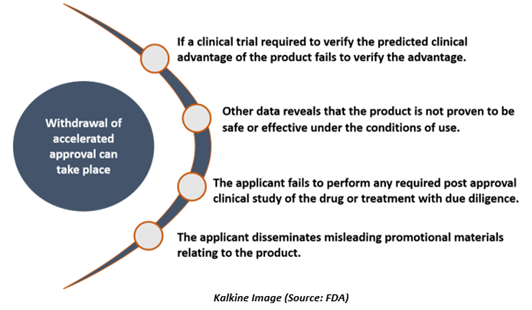 There is no specified timeline for FDA response for Accelerated Approval.

What is Immunization? Immunization is the process of developing immunity or resistance in an individual against an infectious disease by administering a potent vaccine. Vaccines stimulate an individual’s immune system to protect the individual against subsequent disease or infection. Moreover, immunization is an established way to control and eliminate infectious diseases that could be life-threatening. According to the World Health Organization (WHO), immunization is estimated to prevent between 2 to 3 million fatalities every year. The process is commonly recognized as the most successful and cost-effective health interventions, with established strategies making it available to even the most hard-to-reach population as well as susceptible people. World Immunization Week takes place every year during the last week of April from 24 to 30 April. Immunization Week is a worldwide public health campaign for increasing consciousness and rates of immunization against vaccine-preventable infections across the world. Immunization helps to protect millions of lives each year. How Does Vaccination Work? Vaccines are used for immunization of people against infectious diseases causing illness, serious disability or even death. In the human body, vaccines develop a defense mechanism against the disease. Thus, a vaccinated person for a specific condition is unlikely to get affected by the same disease again.   Vaccines comprise of a similar virus or germ that is responsible for the infection. However, the virus in the vaccine has been inactivated, killed, or weakened so that it does not make people sick. Some vaccines contain only a portion of the virus. When a person gets immunized, the body is misled into thinking that it has been infected and the immune system makes antibodies to kill the viruses. These antibodies remain in the body of a vaccinated person for a prolonged period and remember to fight the virus and hence prevent the infection. If the virus from the disease enters the immunized person’s body in the future, the antibodies kill the virus before the person can become sick. Most of the individuals are completely protected against the infection after immunization. However, in a few cases, there are risks that people who are immunized could still get the infection because they are only partially protected from the vaccine. However, this is a rare condition and is only common in individuals with several medical conditions affecting the immune system. Vaccination is the best approach to prevent the spread of infectious diseases with no medical treatment. Like drugs, vaccines also undergo different stages of clinical trials before receiving an approval for commercialization from the respective regulatory authorities. Vaccine candidates are initially given to healthy volunteers to ensure the candidate is safe to use. What is Herd Immunity? Immunization protects the infections and aids in preventing the spread of certain diseases in the larger population. When more individuals in a community are immunized, fewer people get sick because the virus has a fewer number of people to infect, and if someone does not have the infection, they cannot spread it further. Some people cannot get immunized, so ensuring that maximum people in a community are fully vaccinated will help protect the whole community, including those that cannot be vaccinated. This is known as herd immunity. When no one is immunized, contagious diseases can spread in the community rapidly. However, when some people are immunized, the disease can affect a smaller group of people, those who are not protected. But, when most of the community gets immunized, very few community members will get the infection because of herd immunity. To achieve herd or community immunity against any infection, a community must have between 74-95% of the people immunized, depending upon the severity of the infection. The individuals that might be vulnerable to diseases are known as susceptible, for instance, people with impaired or weak immune systems. These individuals might not be able to get vaccinations or may not build immunity even after having been vaccinated. In this case, the only protection against specific infections is for others to get vaccinated, so the diseases are less common. To know whether herd immunity can help combat the ongoing COVID-19 pandemic, click here. What are the Benefits of Immunization? Immunization is the most simple and effective way of protecting people and community from any contagious disease. Immunization works by activating the immune system of the body to fight against specific diseases. If a vaccinated individual comes in contact with the viruses causing these diseases, their immune system is capable of responding more effectively. A glance at the benefits of immunization- Immunization either prevents the disease from developing or reduces its severity. Immunization prevents people and community from getting infections for which there are no medical treatments. These infections can trigger serious complications and even mortality. If exposure to an infection occurs in a community, there is little to no risk of an epidemic if the individuals in the community have been immunized. Immunization can help to protect vulnerable or susceptive individuals from any contagious disease. Difference between Immunization and Vaccination Most of the times, both the terms immunization and vaccination are used interchangeably. However, their meanings are not precisely the same. In vaccination, a potential vaccine is administered to the individual. Immunization is how the body reacts after the vaccine is administered. A vaccine stimulates the immune system of the body so that it can recognize the infection and protect the vaccinated person from future diseases. After the immunization process, a person becomes immune to the viruses causing that infection.

Rising Demand for AI in healthcare: A Glance at BRN, OPL and LBT

What are the significant developments announced by Accsys Technologies towards doubling the production capacity?