The S&P/TSX Capped Information Technology Index has taken a bit of a battering this year. It has sunk 33 per cent year-to-date (YTD).

This raises the question as to whether it might be time to pick up TSX tech stocks on the dip. Tech currently constitutes 5.66 per cent of the S&P/TSX Composite Index.

Let us look at five TSX-listed tech stocks that have taken a beating this year.

SHOP began a surge in April 2020 and in the past few months it has been almost in free fall. Shopify is now back around the range it was in before its pandemic surge and this makes it an interesting stock especially since before the pandemic years, it had been on a comparatively measured but steady ascent.

Shopify has a price-to-earning (P/E) ratio of 18.8. Effectively, the P/E ratio indicates how many dollars you invest to earn a dollar. It is the cost price of the share divided by the earnings per share.

DND was on a downward trajectory for much of this year so far, but since the second week of April, it seems to have stemmed the fall and has had a relatively flat trajectory since, which raises the question as to whether it may start on a rebound.

The stock has reached this price range on multiple occasions this year but hasn’t fallen lower.

The stock of the software solutions provider ended Friday at C$142.16. It is down 20 per cent YTD.

Over the last six months, it has lost 26 per cent. However, it rebounded around three per cent in the last week.

In late February and early march, it was in the current C$140 range but then climbed higher. It remains to be seen if it will extend its rebound over the past week. 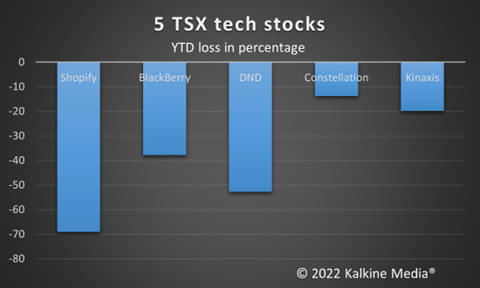 Like their sector, the above stocks have taken a beating this year; some more than others as the graphic shows. Will May be the year the tech sector pulls a recovery this year?

That remains to be seen. But these aren’t small companies, in fact, they are some of the biggest companies in the S&P/TSX Capped Information Technology Index with billion-dollar market caps. And so, these stocks make for an interesting watch.