How does current inflation compare to 1970s stagflation?

Skyrocketing oil prices in the wake of sanctions on Russia and record-high inflation have led to fears harkening back to the 1970s stagflation. Notice, record-high denotes a 40-year record going back to that very time.

It is true that there was an oil crisis back then, but it is a little different than the present. It was a reaction to support lent to Israel during the Yom Kippur War.

It would come to be known as the 1973 oil crisis. Back then certain OPEC nations placed an embargo on the US and Canada among others and not the other way around.

The Biden administration has already restored a sanctions waiver on Iran. The US has also begun meetings with Venezuela with regards to easing oil sanctions, so there may be a couple of options here.

Also, this is just one country Russia. Back in the 1970s, it was many of the oil-producing countries. So, it is not quite the same scale.

Another major difference is the situation with unemployment. Unemployment was one of the major issues with the 1970s stagflation. Presently, the US is experiencing job growth and the unemployment rate is being lowered.

According to StatCan, Canada added 73,000 jobs in March accounting for an increase of 0.4 per cent. The unemployment rate at the end of March was 5.3 per cent, the lowest on record going back to 1976.

A third difference could be a recession. The US economy may slow on the back of the Russia-Ukraine war, but to say it will go into a recession might be quite a stretch.

Also read: Canada Budget 2022: What are Freeland’s plans for cost of living? 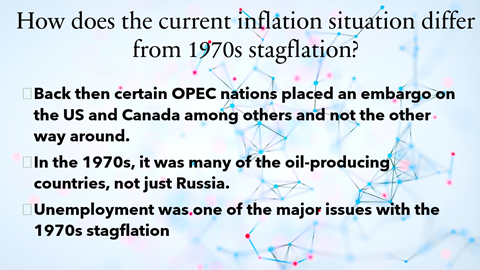 Reportedly, during the 1970s and 1980s stagflation, the inflation rate was over 10 per cent, and it peaked at 14.5 per cent in 1980. By this measure, current inflation is about a third or half of that. A global 1970s-type situation may not be imminent.