The S&P/TSX Venture Metals & Mining (Industry) Index has sunk 9.72 per cent year-to-date (YTD). However, some of its constituents have performed better than others.

Investing in these stocks provides the opportunity to participate in the commodities market without actually buying the physical commodity.

Let’s look at five TSXV-listed metal and mining stocks that make for an interesting watch in May.

The NGEX stock was at C$3.65 at market close on Thursday, April 28. The stock seems to have seen sustained notable growth, increasing a whopping 563 per cent in a year.

Considering lithium’s importance to EVs and the future of the automobile industry, CRE may be a growth stock in the long run. However, how the company performs in the future remains to be seen.

Its 52-week high of C$2.87 came in March this year. Amex has a market cap of C$292 million and its stock seems to be a little volatile.

While its YTD return is a loss of three per cent it has increased three per cent week-to-date. The stock is currently trading almost 36 per cent below its 52-week high of C$13.50.

Alphamin’s stock stood at C$1.38 at the end of the trading day Thursday.

The stock has generally been on a growth trajectory over the past one year, its one-year low of C$0.57 being in April 2021 and it one-year high of C$1.45 coming in April this year.

AFM has ballooned 122 per cent in a year and gained 47 per cent year-to-date. 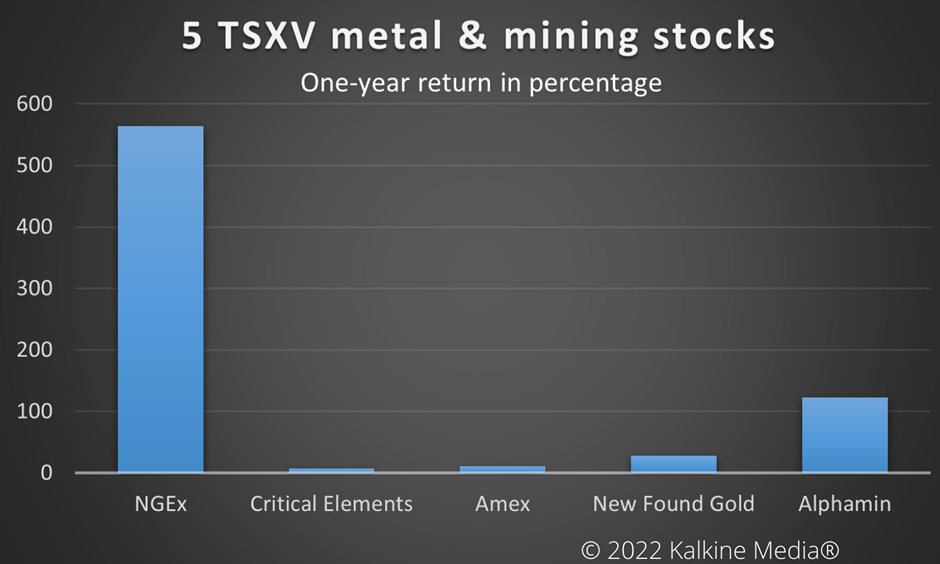 On a year-to-date basis, these stocks outperformed their index – the S&P/TSX Venture Metals & Mining (Industry) Index. NGEX and AFM seem to be on a comparatively higher growth trajectory.

Mining stocks, on occasion, can hedge against inflation. However, before investing in any equity, much homework needs to be done about the company and sector.