Apple’s fully self-driving EV rumored to be in the works, AAPL soars

Reportedly, the new boss in charge of the project, Kevin Lynch, wants a fully self-driving car. If Apple can pull off a Level 3 or above self-driver, it would crack a much sought-after niche in auto manufacturing -- truly autonomous cars. The company has been a trendsetter, so it should be no surprise should it pull it off.

Also, the company’s target is now thought to be about four years. A significant cut down from the previously expected five to seven years. There is also a possibility that should Apple fail to deliver a completely autonomous car by 2025, it may put out a car with lesser technology first before the former’s completion.

Meanwhile, the AAPL stock skyrocketed on the above news breaking. It has skyrocketed 6.2 per cent in the last three days of trading and is further up 0.27 per cent after hours. The last three sessions also saw the volume of trade more than double with 18.7 million, 23.52 million and 13.63 million shares exchanging hands on November 17, 18 and 19 respectively.

Needless to say, the stock is part of the coveted FAANG group and with a market cap of US$2.63 trillion, it is the biggest company in the world today. Closing trade at US$160.55 Friday, November 19, it had an earnings-per-share (EPS) of US$5.61 and a whopping return on equity of 148.41 per cent. Its current quarterly dividend stands at US$0.22, a dividend average of 0.548 per cent, which is noteworthy, given that FAANG stocks don’t usually pay dividends.

Also read: Japan Mulls US Request To Use Gas Stockpiles, Rations In BC After Flood 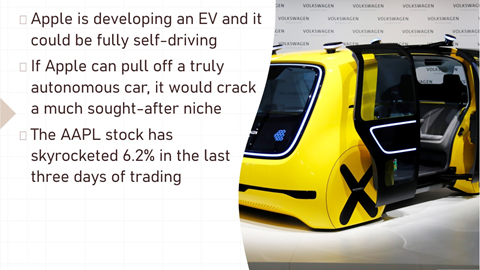 The company has been a trailblazer in technology for decades now, and if it pulls off a truly autonomous car, it won’t be the first time the company has been a gamechanger. Exciting is that without the need of a driver’s cabin or even a steering wheel, a potential Apple car could look very different to what we’re used to, it would likely be a luxurious, more sociable setting; serious competition to Tesla, Alphabet Inc’s Waymo and others.