With a market capitalization of over C$ 15 billion, Metro is one of Canada's largest grocery and pharmacy retailers. The retailer operates outlets under different banners like Metro, Food Basics, Metro Plus etc.

The Montreal-based retail company leverages its supply chain network to serve grocery shops in the locality, thereby acting as a distributor.

Let us discuss Metro's financial performance for the first quarter of fiscal 2022 and its recent stock performance in detail.

Also read: Is SAP stock a buy amid speculations of Saputo acquiring A2 Milk?

Metro Inc, which presently has a price-to-earnings ratio of 19, saw its sales hit C$ 4.27 billion in the latest quarter, indicating a year-over-year (YoY) jump of 0.9 per cent.

On Monday, January 24, Metro's board of directors (BoD) announced a quarterly dividend payout of C$ 0.275 apiece, which was up by 10 per cent YoY. 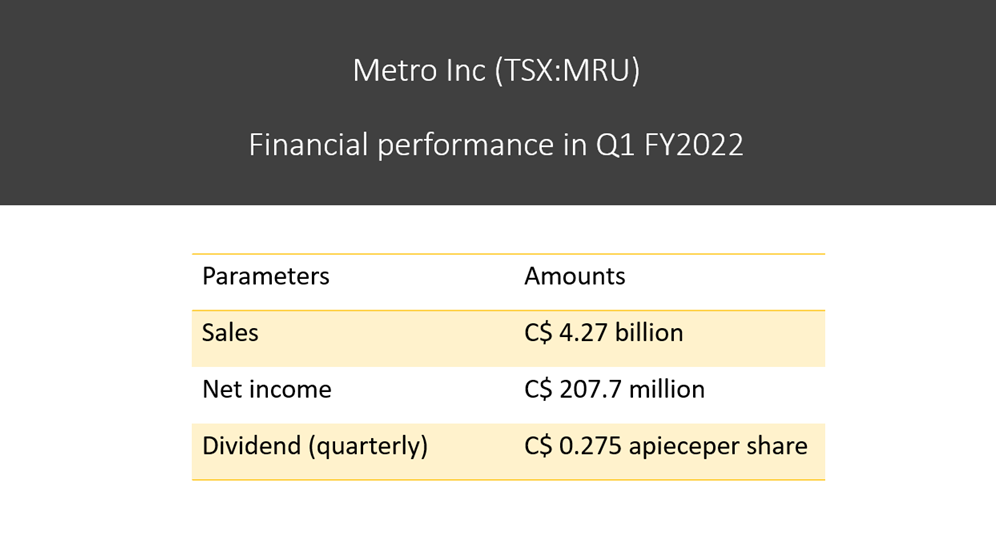 Metro stock closed at a value of C$ 64.45 apiece on Monday, having catapulted almost 13 per cent in the last one year.

Metro Inc has stated that the mounting cost inflationary pressures, including the cost of goods sold (COGS) and labour shortages, in addition to the COVID, has continued to impact the grocery industry.

The Canadian enterprise added that it is "difficult to predict" how these challenging situations could impact its business going forward.

Metro, however, added that it expects its pharmacy sales to increase as it has launched a COVID-19 rapid test distribution network across its store.