Stocks of BRC Inc. (NYSE:BRCC) jumped 30.2 per cent on the day of its trading debut and closed at US$ 15.64 per share. Black Rifle Coffee Company (BRCC) went public on February 10 after closing its merger with a blank-check company.

The Salt Lake City-based company was established to support first responders, former members of the armed forces of the United States, and active-duty military officials.

Black Rifle Coffee Company claims to provide its consumers with great coffee and a significant brand experience. That said, let's find out more about the company:

Can BRCC stock grow in future?

Apart from its coffee products, Black Rifle Coffee Company could get an extra boost as it supports army veterans and first responders.

In the United States, Black Rifle Coffee reportedly carries a conservative image, and it could get the support of right-wing people and supporters of former US President Donald Trump. 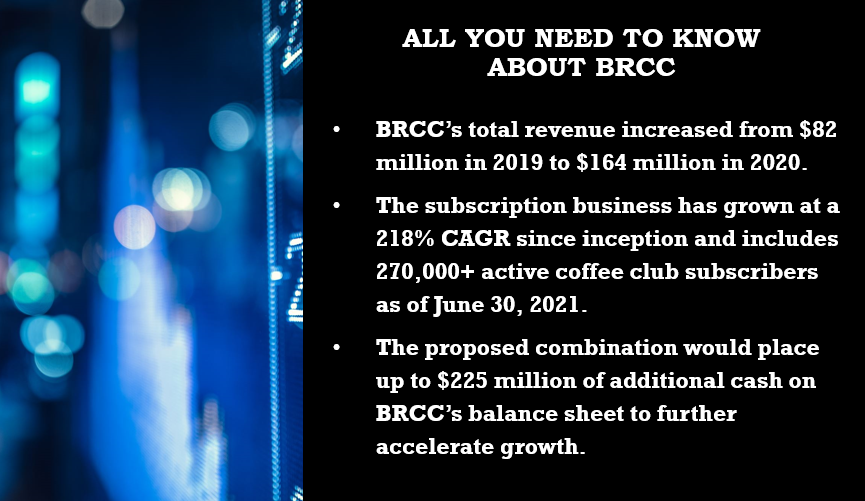 Companies that are said to have conservative leanings are eyeing public markets in the United States. Apart from Black Rifle, companies like Donald Trump's Trump Media & Technology Group and YouTube's rival Rumble are expected to go public.

Although Mr Trump had lost the US Presidential election, he received considerable support from people, as indicated by the vote share percentage. The former US President reportedly received 46.9 per cent of the total votes polled.

Thus, there is a possibility that the coffee company could attract followers of Mr Trump and backers of the armed forces.

According to reports, a survey conducted in 2020 had found that 84 per cent of the respondents bought products from Black Rifle Coffee as they wanted to support the armed forces and veterans.

According to the documents filed with the Securities and Exchange Commission (SEC), `Black Rifle Coffee said it is proliferating and had a community of more than 1.9 million lifetime customers.

Black Rifle Coffee claims to have over 270,000 active coffee club subscribers, and it expects the 2021 revenue to grow approximately 40 per cent to US$ 230 million.