Hootsuite IPO: Here's what we know so far

After its initial public offering (IPO) plans were delayed in 2021, Hootsuite kept its potential investors hooked on its upcoming public debut plans expected this year.

In November last year, published reports had claimed that the Vancouver-based social media engagement platform was looking to raise C$ 200 million via the IPO.

When is Hootsuite IPO happening?

It is not clear when the company will go public. However, Hootsuite's chief executive officer Tom Keiser had once said that the company would need to display consistent growth before going public.

It is expected that Hootsuite could become a publicly-traded company in 2022 and take advantage of the growing appeal for taking everything online ever since the COVID-19 pandemic began in 2020.

Mr Keiser was reportedly looking to expand the company's business operations at a growth rate of 25 per cent in every quarter before going public. 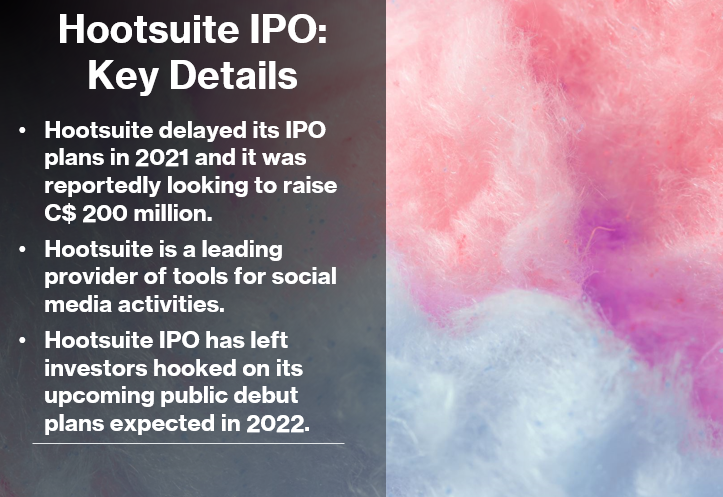 Notably, Hootsuite completed the acquisition of Sparkcentral in 2021. It is believed that Sparkcentral's tools could have helped the company to increase its online sales.

Sparkcentral must have increased Hootsuite's customer base as it already had clients like Air Canada and Slack. In addition, it has a presence in over 20 countries.

There is no official communication from the company. Still, as 2021 was a solid year for IPOs, this year could also witness private companies going public amid hopes that the economy would rebound.

Starting in 2008, Hootsuite has emerged as one of the leading companies providing tools to their users to manage their social media strategies.

After spinning off from Invoke Media, an internet service and marketing consultancy company, Hootsuite was formed.

Social Media plays an essential role in brand promotion these days, and Hootsuite has the potential to capitalize on the growing digital marketing and social media industry.

A Grand View Research report suggests that the digital marketing industry has high growth potential, and it could register a compound annual growth rate of 18.2 per cent in the period 2020-2028.