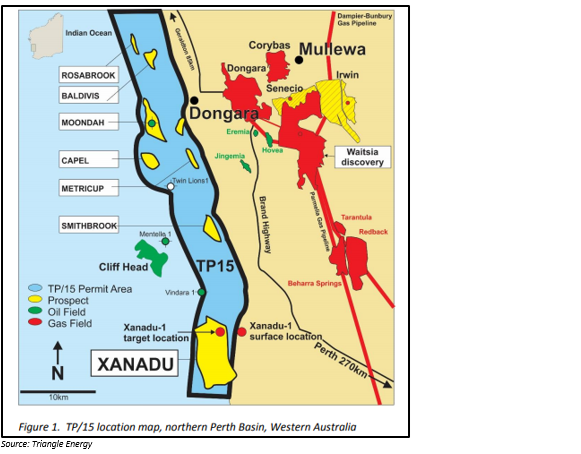 TEG in Xanadu Oil Project, one of the biggest untested oil targets in Perth Basin

Xanadu and Cliff Head are located within the Beagle Ridge, and on the west is the Geraldton fault. Xanadu is one of the unexplored regions in the area. Both Xanadu and Cliff Head shares the same target reservoirs. Therefore, similar geological conditions can be expected for Xanadu as for Cliff Head.

In February 2017, Triangle Energy completed a farm-in agreement for drilling the Xanadu-1 well offshore exploration permit TP/15, earning up to 30% working interest in the permit by contributing 40% of the drilling costs. Whitebark Energy accounted for almost 20% of the drilling costs to earn 15%, while Norwest Energy remained the project operator, holding 25% interest. The remaining stake of 30% was held by 3C Group.

The maiden drilling program at the Xanadu-1 well was conducted in September 2017, with the well reaching 2,035 Measured Depth Rotary Table (Oil). The drill confirmed the intersection with the organic compound bearing reservoirs as shown by the elevated gas readings, fluorescence and oil flows during drilling.

The wireline logs from drilling over a 330 metres section of the well were run by contractor Schlumberger, with highly promising drilling results. Triangle confirmed the discovery of oil at the Xanadu-1 well on 25 September 2017.

The wireline logs provided insights on the quality of the reservoir and sand intervals along the Irwin River Coal Measures (IRCM) with porosities ranging from 15-16%. Fluorescence in rock cuttings during drilling persisted for 12 metres in sands over the water-bearing lower intervals. The MDT modular formation dynamics tester checked the real-time flow resistivity in the reservoir and resulted in a water gradient, with the sampling done using the wireline tool despite the high oil saturation.

The drilling results indicated the analogy between Xanadu 1 and Cliff Head field to be quite accurate and also substantiated by the fact that both of the fields use the same target reservoirs. The casing and cementing till 971 metres MDRT have been completed so far (almost 250 metres above the zone of current interest).

In early 2018, Norwest, the operator, announced a contract for a 40 square kilometres seismic study.

Triangle sees the Xanadu prospect in line with the strategy to secure an established & top-notch position in the Perth Basin, targeting on the conventional oil discovery. On 31 May 2019, a 3D seismic program was launched for the TP/15 permit, covering over 40 square kilometres, with the completion on 11 July 2019.

The 3D seismic data is currently being processed and interpreted and on completion of which, a decision for an appraisal well is expected by the JV partners. 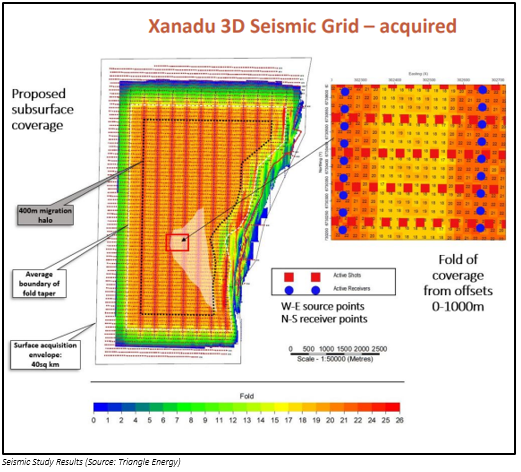 The Xanadu-1 well intersected three sandstone reservoirs within Irwin River Coal Measures (IRCM). The upper sand "A" has 4.6 metres of net oil pay, with the lower two sand regions "B" and "C" understood not to host oil pay. However, there might be a presence of oil in an up-dip location.

The thickening of the reservoir across Xanadu is not evident as per the seismic data. The downdip potential exists in “A” sand, based on the pressure data but is regarded as having a lower chance of geological success for any future appraisal drilling.

Future Steps – The Onset of Xanadu-2 and Other Possible Developments

The positive results from the Xanadu-1 well provide enough confidence and good quality data to proceed with the Xanadu 2 follow up well.

The JV partners are also considering conducting a low-cost 2D seismic data for the region within and around the Xanadu field. Other promising targets such as deep Kinga/High Cliff Formations are also being considered and work going forward would require the estimation of prospective resources.

The 3D seismic study provides a better interpretation of the Xanadu-1 well and supports the sequencing of seismic study before any further drilling.

The future study plans are being scheduled including both Xanadu-1 & other promising targets and would be scheduled with the JV partners.

Cliff Head, the flagship operations of Triangle Energy, along with TP/15 close to the Cliff Head operations, might provide the expanded feed in future to the 15,000 bopd Arrowsmith stabilisation facilities.