On 13 December 2019, the CH-13 well at the Cliff Head Oil Field resumed production after the deployment of an electric submersible pump replacement. The well after testing attained a throughput rate of 150 bopd, with the steady-state production for the field at 970 bopd.

Following the resumption of production from the CH-13 well, the steady-state oil production of the Cliff Head field reached 1,028 bopd on 18 December 2019.

Cliff Head operations include the only offshore and operating onshore infrastructure in the Perth Basin and are crucial for the development of the Perth Basin.

The flagship operations include the offshore Cliff Head Alpha platform and an onshore Arrowsmith stabilisation plant, integrated via production and injection pipelines. The plant has a capacity of over 15,000 bopd, giving enough processing capacity to accommodate future expansions as well as processing of the third-party crude, further adding to Triangle's income.

Triangle Energy (Operations) Pty Ltd, in which the company holds a 50% equity interest, took over the operations at the Cliff Head in mid-2018, targeting on maximising the operational efficiencies, optimising the costs maintained steady and stable production rates, leading to higher margins on a per-barrel basis.

The operational results for the September quarter fall in line with the operating margin of $53.677 a barrel. With the average production rate of 778 bopd, TEG earned an operational profit of $41,761 a day.

If TEG manages to maintain the production rate (1,028bopd) and assumes the operating margin to be constant, the company might bring in an average of $55,179 a day, an increase of almost 32% against the September quarter.

Triangle Energy has been reviewing opportunities to identify further prospects to expand the production rates at Cliff Head and to increase the life of the operations. TEG also owns a 45% stake in Xanadu operations, a confirmed oil discovery that on development would further strengthen the company's financials.

Triangle has prioritised the prospective areas close to the Cliff Head platform to be able to operate them without the requirement of additional capital as significant as in the absence of a platform in the region within the Cliff Head field. Consequently, TEG is developing such field prospects extending the economic life of the offshore Cliff Head Alpha platform and the plant. Mentele is a promising area that has shown oil in D3 reservoir with the best estimate for the prospective resource addition of 3.3 MMstb (million stock tank barrels). 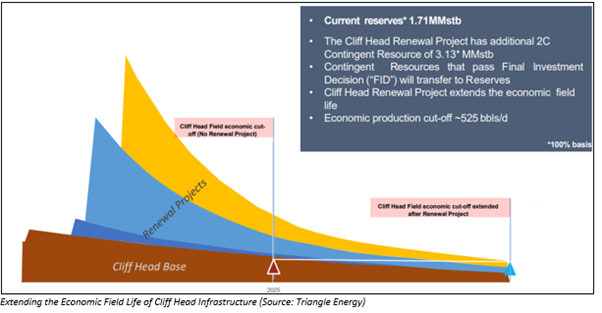 State Gas Limited – The Child Larger Than The Father

Triangle Energy owns a 35.47% stake in State Gas Limited, which wholly owns PL 231 in central eastern Queensland, hosting a conventional gas project. In 2017, State Gas Limited (ASX: GAS) got listed on the ASX, at an issue price of $0.2 per share, raising $5.25 million for the project.

The gas project struck coal seam and conventional gas in the first Reids Dome well, and since then there has been no looking back for the operations. Currently, the gas rate stands at 120mscf/d from the gas well in Reid Dome at a depth of 702 metres.

The market capitalisation of Triangle Energy does not match with the asset valuation, even after considering its strong financials and positive cashflow.