GTI commenced the phased exploration program at the Project earlier this month, including the maiden drilling campaign. Other recent advancements include receiving a data package from July’s airborne magnetic survey and securing additional gold ground on the Niagara Trend.

GTI is also making progress at Henry Mountains Projects in Utah with the review completion of the recently secured data package and entering binding agreements to acquire two mineral leases from Anfield.

The expanded soil sampling program at Niagara (Kookynie) Gold Project began on 17 August 2020. The next stage of GTI Resources’ field program marks the ensuing step in the rapid evaluation of the potential for economic gold mineralisation across the newly consolidated and historically underexplored Niagara Trend near Kookynie in WA’s highly prospective eastern goldfields.

GTI continues to rapidly evaluate the potential for economic gold mineralisation across Niagara Trend. In the meantime, gold remains in the vicinity of USD 2000 per ounce, while the Australian dollar fetches approximately USD 0.72. Subsequently, it seems probable that if GTI Resources’ could fast track production at Niagara it could prove to be highly beneficial.

Geochemical results from the soil sampling program will be integrated into the existing lithogeochemical, geophysical and geological data sets. This is likely to guide the Company in targeting of the circa 50-hole first phase Aircore drilling campaign, which is planned for September.

“We will follow up the current work with first phase drilling of about 50 Aircore holes during September”, says Executive Director Bruce Lane.

GTI has also confirmed the second phase of drilling, due to commence during October. This reportedly would utilise targeted deeper reverse circulation (RC) drilling, to test the most attractive zones of interpreted gold mineralisation.

“The current field work combined with September’s planned Aircore drilling will further refine our understanding of the lithogeochemical and mineralising systems at Niagara and will help us locate the most prospective zones for October’s second phase deeper RC drilling campaign”, opines Mr Lane. 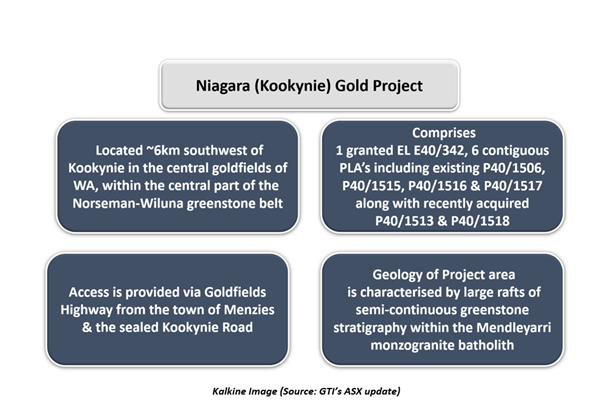