GTI Resources Limited (ASX:GTR) is rapidly evaluating the potential for economic gold mineralisation across the newly consolidated and historically underexplored Niagara Trend, near Kookynie in WA’s highly prospective eastern goldfields. The Company is excited at the prospect of being able to drill test the Niagara project soon.

The Company has successfully concluded an auger soil sampling program and reconnaissance mapping at its Niagara (Kookynie) Gold Project. This significant update follows the completion of GTI’s Share Purchase Plan (SPP), with SPP shares expected to commence trading on 31 August 2020.

A significantly expanded 1,000-hole soil sampling program was completed through auger drilling at the Company’s Niagara Gold Project near Kookynie in WA. Below are the program details: 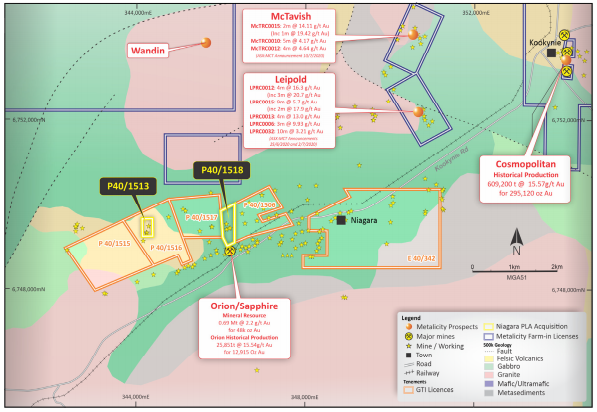 According to GTI, ~ 1,000 soil samples from the geochemical sampling program are currently on the way to ALS Laboratories, Perth. Multielement geochemical assay results are expected within the next 2 weeks. GTI’s key activities underway comprise of integrating historical data, field observations along with newly acquired geophysics and geochemistry. They are likely to help develop a lithogeochemical and exploration targeting model.

GTI Resources advised that further refinement of the lithogeochemical and exploration targeting model is expected to be undertaken once results from the current auger soil sampling program are received. The integrated data approach will be used to develop targets, which will be initially examined by Aircore drilling and then by reverse circulation (RC) drilling.

The Company has already secured a drill rig to complete Aircore drilling and follow up RC drilling. Aircore Drilling of circa 50 aircore holes is likely to begin in the third week of September 2020. It would be followed by RC drilling, planned for the third week of October 2020.

On 26 August 2020, the Company notified that it had concluded its SPP which was announced on 13 July 2020. Closing of the SPP offer was scheduled for 21 August 2020. The SPP raised $978,000 before costs and was fully underwritten by CPS Capital Group Pty Ltd.

GTI Resources believes that sufficient funding is now in place to achieve the Company’s ambitious work programs in 2020. These work programs encompass assets in both the US and Western Australia.

While the drilling is scheduled to commence next month at the Niagara (Kookynie) Gold Project, the phase two exploration program is being planned at the high-grade Jeffrey project in Utah.