Gold has been on a positive trend for quite some time now. The COVID-19 pandemic has encouraged investors to shift their position from conventional investments to gold, establishing its relevance as a hedge and accelerating its price performance.

Gold prices increased by almost 12% during the first half of 2020 and further by 11.7% since the beginning of July. The strong rally has encouraged gold miners and explorers to either strengthen their mining operations or invest in critical projects to increase output in the upcoming years.

A strong growth in net inflows in gold backed ETFs has been observed (refer to the image below) with institutional and individual investors continuing to support gold price rally and strong continued buying volumes from central banks.

While mine ore grade at gold deposits has been declining, only limited “world class” discoveries have been made in the recent past. The high prices and technological advancements have pushed the miners and explorers to explore new frontiers across the globe.

Gold stocks are one of the popular investments, especially during the current times of increased volatility in equity markets, reaping the benefits of surging gold prices and strong exploration or operating results.

While the explorers have conducted only limited exploration activities for greenfield projects, major focus of the last decade has been around brownfield projects. Post the 2008 gold rush, which resulted in a strong rally in the commodity prices hitting the highs in 2011, the commodity cycle has begun to take turns and now reached another high of US$2070 an ounce of gold in August 2020. 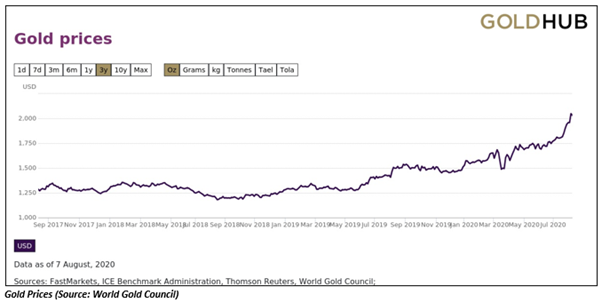 In the current attractive bullion market, which is staging series of gold rallies, the potential around gold sector players has significantly boomed.

Dark Horse Resources Limited (ASX:DHR) is an experienced gold and base metals explorer, primarily engaged into the exploration of key gold projects in the prolific world-class mining jurisdictions. The explorer is focused on the Las Opeñas and Cachi gold projects in the well-mineralised metallogenic provinces of Argentina, boasting the presence of existing excellent infrastructure.

Las Opeñas Gold Project is located in the fecund San Juan province on the structural trends similar to the Indio Belt, which hosts the mega gold silver epithermal mineralisation including Barrick’s 1.2 million ounce Veladero mine, Mineros S.A.’s Gualcamayo and Austral Gold Limited’s (ASX:AGD) Casposo gold operation. The gold project is located at an altitude of ~3,000 metres and stretching across 1,462 hectares.

A Reverse Circulation (RC) drilling program in April 2019 confirmed the presence of high-grade mineralisation near surface. Drilling programs at the Presagio prospect have been planned to define and estimate the JORC compliant mineral resources. 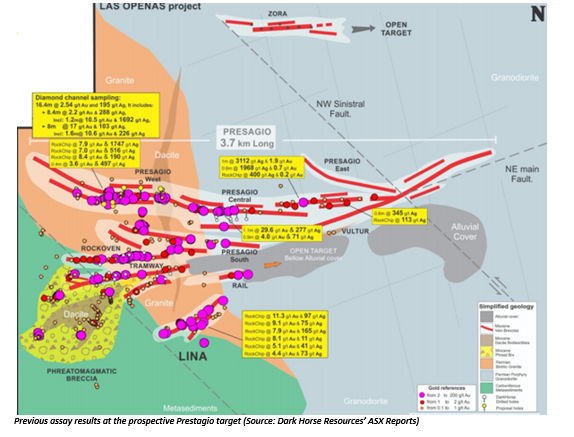 Presagio is the largest vein system which runs along 3.7 kilometre within the Las Opeñas Project, exhibiting a strong combination of vein and breccias and has been included in the prospective targets for drilling programs.

Deseado Massif hosts mineral resources in excess of 28 million ounces and has observed the development and commencement of 7 world-lass mining operations in the past 15 years.

The largest prospective target is Vetas Cachi, which runs along a 1-kilometre structural corridor with a width of 315 metres, and is interpreted to be open in all directions.

Dark Horse plans to identify and estimate the maiden JORC mineral resources within 12 months and continue to upgrade it over the next 4 years. The company has planned a 11,000 metres drilling program to define an initial mineral resource.

Dark Horse is progressing on 100% acquisition of the Tampere gold project in Finland and Bergslagen tungsten project in Sweden. The Tampere gold project spans across 7 exploration permits, namely, Hopeavuori (2 permits), Isovesi, Järvenpää, Kalliojärvi, Lavajärvi and Metsäkylä in the presence of existing excellent infrastructure. The mining project is located in the neighbourhood of Orivesi, Jokisivu and Kaapelinkulma gold mining operations and a processing facility at Vammala.

As per a Fraser Institute’s study, Finland ranks second only to the Western Australia in the Investment Attractiveness Index. The au courant audience must know that Finland is among the premier gold producing regions in all of the European Union.

Previously, the Hopeavouri prospect at the project has been subject to a 3,341 metres drilling program at 54 drill holes to assess a 30 metres wide mineralisation structure along a strike length of 300 metres.

The surface geophysical program further suggested that the zone stretches further in the northwest to a total of 800 metres. While only shallow drilling (75-100 metres) was conducted, assay results observed 132 anomalous mineralised intercepts-

Kalliojärvi: 38 drill holes for 1,814 metres along a 350 metres strike with intercepts of-

Lavajärvi: 17 drill holes for 1,547 metres with intercepts of-